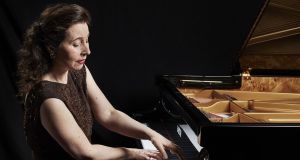 Angela Hewitt playing her Fazioli: ‘I adored this piano. It was my best companion.’ Photograph: Keith Saunders

A unique piano treasured by the Canadian virtuoso Angela Hewitt as her “best friend” was broken beyond repair when it was dropped by specialist instrument movers.

The expensive accident happened late last month after Hewitt finished recording Beethoven’s piano variations at a studio in Berlin. She said it left her in such shock that it took her 10 days before she could announce the news to her followers.

In a Facebook post Hewitt said her F278 Fazioli, the only one in the world fitted with four pedals, and worth at least €175,000, was “kaputt”. She said: “I hope my piano will be happy in piano heaven.”

The broken instrument was inspected by the firm’s Italian founder, Paolo Fazioli, who declared it “unsalvageable”. The piano’s iron frame smashed when the 590kg instrument dropped as movers tried to lift it on to a trolley. The force of the break, compounded by the high tensions in the piano’s strings, was so strong that it split the piano’s lid in two.

“It makes no sense, financially or artistically, to rebuild this piano from scratch. It’s kaputt,” Hewitt said.

The accident left Hewitt in mourning. She said: “I adored this piano. It was my best friend, best companion. I loved how it felt when I was recording – giving me the possibility to do anything I wanted.”

The unnamed firm of movers was “mortified” by the accident, she said. “In 35 years of doing their job, this had never happened before,” she wrote. “At least nobody was hurt.”

Hewitt, one of the great Bach interpreters of our day, had used the piano on all her European recordings since 2003, including a celebrated recent performance of Bach’s six partitas. They are all that remains of the piano.

Hewitt, who divides her time between London and a home near Lake Trasimeno, in central Italy, said an “insurance saga” was already under way that she hoped would be resolved quickly so that she could find a replacement.

Terence Lewis of Jaques Samuel Pianos, in London, who has supplied other Faziolis to Hewitt and spoke to her about the accident, said the destruction of the piano was “like losing a limb”.

He said: “Every single piano is different, and you grow with them and they change as they age, and you develop together. For a pianist at that level a piano becomes an extension of your body, and that’s why she dragged it around for her recordings.”

Lewis is responsible for providing Faziolis in London venues for international pianists including Daniil Trifonov and Herbie Hancock. He played Hewitt’s piano when it was made in the early 2000s at the Fazioli factory in Sacile, northeast of Venice. “I know this piano really well,” he said. “I practised on it for a three or four hours after it was made.”

Lewis said its four pedals made it unique among pianos of this model, which are worth £150,000 new. “Paolo [Fazioli] says he will never fit four pedals ever again to it [an F278] because it was such a pain in the arse.”

Lewis said he felt for the moving firm involved. “Accidents do unfortunately happen, but this was a very big one. She would not have let it be moved by anyone she didn’t trust. She was very happy with them. I would have cried if I’d been involved. They must feel terrible, because they would understand what the instrument means to her.”

He pointed out that if the piano had not been damaged, Hewitt could have sold it for more than any other second-hand Fazioli of its age. “What would have added value is that fact that it was the great lady’s piano, because she is the goddess of the piano. If that piano went to auction unbroken that would have given it a very large premium.”

He added: “Faziolis are truly handmade. They make up to 150 a year. It is absolutely bespoke, incredible quality. Once pianists start using Fazioli they become dedicated to them.

“I spoke to Paolo, he said, no, it’s absolutely dead. He is sad, because it is one of his creations. And he is sad for Angela, but it’s life there is not a lot you can do about it.”

A spokeswoman for Fazioli said it could not comment. He said: “Unfortunately, in such a circumstance we cannot give information about the instrument value, since an insurance investigation is in progress.” – Guardian