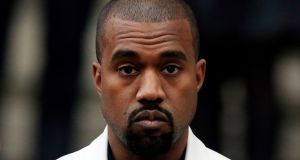 File photograph of Kanye West, who has announced he is now to be known as Ye. Photograph: Jonathan Brady/PA Wire

Kanye West has announced he is now to be known as Ye.

The rapper has used the nickname for many years and even used it for the title of his album last June.

He wrote on Twitter: “the being formally (sic) known as Kanye West. I am YE.”

the being formally known as Kanye West

West was expected to release a new album entitled Yandhi later on Saturday to coincide with his appearance on Saturday Night Live.

He will be the musical guest on the US sketch show, which will be hosted by Star Wars actor Adam Driver. He is likely to debut new music during the live programme.

The show’s executive producer Lorne Michaels had previously revealed that West was a last-minute confirmation after Ariana Grande dropped out for “emotional reasons”, shortly after the death of her ex-boyfriend Mac Miller.

West is following a long line of rappers who have changed their name.

Diddy has been known by monikers including Puff Daddy, Puffy and P Diddy, while Snoop Dogg has previously gone by the name Snoop Lion. – PA