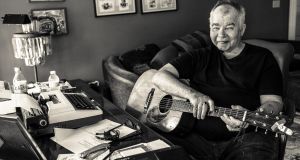 John Prine on throat cancer: “In a strange way it was a blessing”

“We’ve been busy,” says John Prine. “I just turned 70 last year and I thought that by the time I’d turn 70 things would have slowed down, but they’ve sped up.”

Is that a good or a bad thing? “I don’t have enough time to decide.”

Do you have any reason for this spike in popularity?

“No, none that I can see, except maybe it’s taken people this long to decide whether they like me or not.”

He has been making country-folk music for almost 50 years

Prine is in sparkling form on a dodgy line from his home in Nashville. What with his crumpled voice, a result of his brush with throat cancer some years ago, and the poor connection, his conversation is laced with crackle and pop. He has been making country-folk music for almost 50 years, classics such as Sam Stone and Angel from Montgomery and more recent gems such as In Spite of Ourselves.

He topped the bill at the Newport Folk Festival in Rhode Island recently and its festival director told NPR that there wasn’t enough time to accommodate all the artists who had asked to join him onstage. Those who did include Roger Waters, Margo Price, Bon Iver’s Justin Vernon and My Morning Jacket frontman Jim James.

This month Prine returns to Ireland for a quick reprise tour following gigs in April with Jason Isbell and Amanda Shires. This time it will be essentially an unplugged performance (with his guitarist and double-bassist) but he will be joined by the alternative country star Sturgill Simpson, with whom he shares rehearsal space in Nashville. “I said ‘Come to Ireland with me and I’ll show you around the countryside. We’ll play some small places together and one in Dublin that will pay for everything.’ ”

He likes to spend time in this country and not just because he met his wife, Fiona, here. They have a cottage in Kinvara, Co Galway, where this year they’ll spend Christmas. “The first time I went out west it was the tail end of the Galway arts festival. This would probably be the mid-1980s. I really fell in love with the place. We went down through Clare. Everything was magical to me.

“I think it was because it reminded me of America in the 1950s and 1960s when I was growing up. It was my favourite time. I grew up in Chicago but I spent a lot of time down in Kentucky, and Kentucky was about 20 years behind the life that was in Chicago. And I know things have changed a lot since then – you can cross the country real fast these days – but the Ireland of 30 or 40 years ago is still imprinted on my mind.”

Is his image of 1950s and 1960s America too idealised? “That may very well be . . . and yes, there were a lot of bad things going on when you look back in retrospect, but day-to-day life was a lot simpler and it seemed like people were not so paranoid. People didn’t mind talking to you.”

He is also happy to be away from all the noise surrounding “that idiot in the White House”.

“[In April] it was a real relief to be out of my own country because you weren’t hearing on a daily basis all this nonsense, you were actually hearing world news.”

Prine is disappointed with how country music has turned in recent years. “The stuff they’re playing now is just bad pop music and I’m really hoping that it’s run its course.” He agrees with the argument that country is music for adults. “Yeah, you don’t hear too many rock’n’roll songs about ‘Hey, let’s go feed the dog’ or ‘Hey, let’s go see a movie’.

“I try to write about things that actually happened so that I know it’s real before I put it down on paper. I try to mention a chair or an ashtray so people can relate to the characters, like, ‘Wow, I have an ashtray in my house too’. I’ve always tried to ground my songs in reality no matter how far-out they get.

“The only reason I considered myself a writer was because I was writing about things other people weren’t writing about, like the time I wrote that song about the veteran who was putting a needle in his arm [Sam Stone]. In the 1970s, when I wrote that everybody was writing ‘Screw the war’ or ‘Screw the soldiers’. I was in the army in the 1960s. I didn’t go to Vietnam. I went to Germany where I drank beer. But I did have an empathy with the soldiers in Vietnam.

“I didn’t hear anybody talking about the plight of a soldier coming back home and what he’d gone through. That was why I wrote about that stuff. If somebody else had done it I probably wouldn’t have touched the subject.”

Today, with a new album on the horizon, he is back writing songs, though not about Trump yet. “I’ve tried a couple of times to write something, but every time I do, it always turns into a rant, and I think when you’re dealing with something like that, humour is the best way to go about it.”

His health is good. He is working on a song called “I feel a whole lot better than I look”, he says, and then erupts in a wheezy chuckle. He is being monitored closely because of his throat cancer, so that medics caught and dealt with his more recent lung cancer very early. “In a strange way it was a blessing.”

He is at the stage where he can be proud of the work. “I’m starting to have people playing tributes to me, which initially I always rejected. But the few times I’ve heard people doing my songs and stuff it’s really great.”

For Prine, music is a family business. His wife Fiona is his manager, his son Jody runs the record company, another son has a band and another is “going to college to study the music business … Every time I take my guitar out of its case, the money I make is all going to my family.

I must have done something halfway right

“Everything I’ve done over the last 50 years has come home to roost and it’s really good. So I must have done something halfway right.”

*This article was amended on August 14th. The original version stated that John Prine had been treated for liver cancer. In fact he was treated for lung cancer and is now cancer-free.