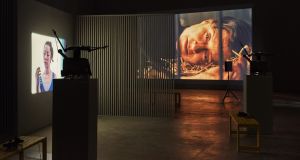 Have you ever had the experience of coming out of a movie and turning to your companion to say: “Yes, but what was it about?” Art films are like that, times a million.

Make it an art film based on an already ambiguous Franz Kafka short story and you know you’re in for endless complexities. In an age of high-concept cinema, which at the end of 90 minutes (if you’re lucky) can turn out to be little more than a one-liner, with some kissing and violence thrown in, there’s room for things to make you think. At Visual, you can give yourself up to the musings, and be well-rewarded with the world premier of UK-based American artist Daria Martin’s new film, A Hunger Artist.

The action centres around a caged man, starving himself for the entertainment of well-dressed families who sit, cabaret-style around tables in a luxurious chandelier-lit tent. A woman breastfeeds a baby, a man licks his lips. Enthusiasm is whipped up with vaudeville cries, photographs are sold. Then fashions change, and our hunger artist ends up as a side show. Forgotten by his new manager, he ultimately dies and is replaced in the cage by a panther.

The Kafka short story was published in 1922. Since then, this weird, compelling tale has fascinated creative types, leading to multiple interpretations. A version by the Brooklyn-based theatre company Sinking Ship is currently at the Edinburgh Fringe (until August 28th, edfringe.com). One of the reasons for this is that the story, as source material, is so rich. There’s voyeurism and performance, gratification and denial, public spectacle and its effect on mental health, and that no small matter of life and death.

Martin’s version is 15 minutes long, which is an ideal duration. You can absorb it, consider and watch it through again. I wish the makers of some art films, who seem to feel that an endurance test should be part of the experience, might take note.

In her telling, the sense of the artist, trapped in his own prison of the body, comes to the fore. He uses his dying breath to apologise: “I have to fast. I can’t help it, I never found any food I liked. If I had, believe me, I would have stuffed myself.” What the audience were applauding was never the thing itself.

The panther who quickly replaces him in the cage is everything the hunger artist isn’t: vital, beautiful, full of appetite and, like all animals (except possibly domestic cats), ego-free. The audiences love him, though in the animal’s eyes in the final frame, there is the hint that he too may not last the course.

It’s a timely reminder that anyone, or anything that relies on the fickle attentions of the crowd, the admiration of the outside world for sustenance, risks being both abandoned and ultimately consumed from within.

At Visual, The Hunger Artist is shown alongside a trio of films exploring the rare psychological condition of mirror-touch synaesthesia. Sufferers feel a physical touch to their own bodies when they see someone or something else being touched. The three short films, Sensorium Tests (2012), At the Threshold, (2014-2015), and Theatre of the Tender (2016) are enigmatic and unfold at a leisurely pace, the same actors give a sense of continuity by reappearing in each. Without allowing myself to be overly troubled by that erroneous and ultimately pointless task of wondering, exactly what does the artist mean, I left with a feeling of gentle melancholy caused by the insight into the intense emotional pain that extreme moments of empathy can engender.

The timeless sound of “Om” seems somehow to have become all zeitgeisty. Earlier this year the Rubin Museum in New York ran the OM Lab, an interactive exhibition that invited audience members to record their own expression of “the ultimate, omnipotent and all-pervading essence of existence”. The chant, which is more than 3,000 years old, is central to many Asian religions and traditions, and the more than 10,000 discrete Oms recorded at the OM Lab are now playing, through dozens of speakers, to audiences sitting on benches at the Rubin’s The World is Sound exhibition.

It’s possible we’re having a cultural moment, or perhaps the Rubin took a leaf out of Camille Norment’s book. Her installation, Prime, brings restful chant to the Temple Bar Gallery. Prime debuted in 2016, before the full excesses of Trump’s presidency were to trouble our meditative rest, but it’s clear that the current state and shape of the world is leading to a greater interest in finding a quiet space to think, be and, however briefly, shut out all that social and political noise.

Of course calm is relative. The noisier it is outside, the better the experience of contrast is within. The Temple Bar Gallery’s large shop-style windows, which have compromised some exhibitions, and been screened off in yet more, play their part here in providing a sense of retreat. Without arguing for greater external chaos, it would be nice to have yet more. Norment’s “pre-lingual polyphonic composition” resonates around the space, but it felt more like a pleasant moment than a vital respite.

Having said that, the Norway-based, US-born artist, who has shown at MoMA New York and also represented Norway at the Venice Biennale (in 2015), has gone a step further here. In Prime, the speakers are in the cluster of benches that are the only visible sign of the exhibition in the space. Because of that they vibrate. And, as each bench is wired to a different sound, the vibrations change from bench to bench. You can have great fun either moving around and experiencing the different feelings, or watching the pleasant surprise on people’s faces as they discover what’s going on below – which is perhaps why I didn’t manage to dip into a profound state of contemplation. But it made for an enjoyable interlude nonetheless.

Dating Amber: A story about two gay teenagers, being each other's beards
8

Who was Red Hugh O’Donnell? The ‘fiery’ symbol of Gaelic resistance
9