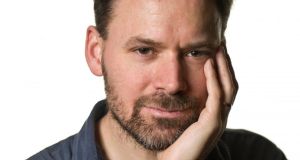 John Harris: arriving into a situation in which future festival themes and commissions are already in train

The capital’s biggest new music bash, the New Music Dublin festival, has a new festival director in John Harris. He is a composer and is currently chief executive and artistic codirector of the Red Note Ensemble in Scotland. His CV includes work with the Paragon and Hebrides Ensembles and he will retain his roles with the Red Note Ensemble while directing New Music Dublin.

That festival is an initiative of the Arts Council, and was held for the first time in 2013. The Arts Council does not run festivals, so the task was farmed out to a steering group involving RTÉ (whose orchestras and performing groups gave concerts during the festival), the National Concert Hall (which provided venues, publicity and marketing), and the Contemporary Music Centre (which represented the interests of the Arts Council).

The festival is obviously a good idea. It fills the gap that was left when RTÉ abandoned its Living Music Festival after 2008. It has the potential to mount large-scale works that might otherwise never be performed in Ireland, and to provide a high-profile focus for new music and for the work of Irish composers in particular.

Its success in realising its potential has been limited, however. Behind the scenes its experience has been like that of a child of warring parents, and its development has been pulled this way and that by the vested interests of its steering group.

The first festival was devised and developed by an independent project management team. Yet the festival’s first orchestral concert was a patchwork created out of an existing RTÉ NSO event that the broadcaster declined to rebuild from scratch when it became part of the festival programme. It’s not something that RTÉ should have foisted on the festival, or that the NCH and CMC should have allowed RTÉ to get away with.

Then, out of the blue, the third festival was renamed. It became What? . . .Wow David Lang’s Festival of Music, simply because Bang on a Can composer David Lang was in charge of programming that year’s events. (The first festival had no individual artistic director, the second was planned by Donnacha Dennehy. ) Lang was also allowed to abandon the widely praised family-friendly events and installations that had been held in small rooms in the NCH building.

Worse was to come. The Arts Council commissioned a review of the festival and its achievements late in 2015, by which time it had already been decided not to hold any event in 2016.

The announcement of Harris’s appointment prompted me to request a copy of the review, which was carried out by Dermot McLaughlin, who spent more than 15 years of his career at the Arts Council, including time as music officer and as assistant director.

His summary of the reasons for abandoning the 2016 event are worth quoting in full. “No agreement had been reached with a festival director for 2016. No programme theme had been agreed for NMD 2016. All parties to the steering group were concerned at the very short planning window for 2016. Issues had arisen over the availability of venues and spaces within the NCH during 2016 as a result of the rescheduling of essential building works as part of the redevelopment of the venue. Issues had arisen over the availability of NSO. No management arrangements had been agreed or put in place for 2016.

Yet the steering group’s evaluation of the 2013 festival had noted that “the planning cycle for this festival was too short. Given that there is a multi-annual commitment for this festival, a sensible approach would be to programme two or three years of the festival at one time.” So the people who knew that a multi-annual planning cycle was needed then created “the very short planning window for 2016”, and went on to use it as an excuse to cancel the 2016 festival. You see what I mean about the parents’ problems being foisted on the child.

What has all this got to do with John Harris? He arrives at a time when the festival’s web addresses have been allowed to lapse. And, strange as it may seem, he is arriving into a situation in which future festival themes and commissions are already in train. The idea of a festival director who will get to direct the festival on his own artistic terms seems not yet to have been fully taken on board by the festival partners.

When Stockhausen offered to come back, complete the rehearsals and give the performance for no fee, RTÉ declined

RTÉ has a long-standing negative track record in allowing artistic freedom to outside bodies using its orchestras. Back in 1959 Radio Éireann, as it then was, refused to let its symphony orchestra take part in a performance of Handel’s Zadok the Priest during the first Dublin International Festival of Music and the Arts because the text included the words “And all the people rejoiced and said ‘God save the king! Long live the king! May the king live forever.’ ”

In 1982 the Dublin Festival of 20th Century Music’s concert performance of Karlheinz Stockhausen’s Inori had to be cancelled when heavy snow prevented members of the RTÉ SO getting into the city centre for rehearsals. When Stockhausen offered to come back, complete the rehearsals and give the performance for no fee, RTÉ declined. I only know this because Stockhausen told me the last time I interviewed him.

John Harris will surely have his work cut out for him.