Justin Bieber’s tour cancellation: ‘I want to be sustainable’

‘I let jealousy and fear run my life’: The pop star explains why he has cancelled 14 shows 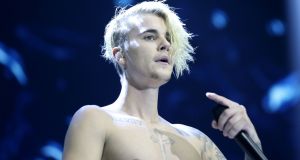 Justin Bieber: his Instagram message elaborated on his reasons for cancelling the rest of his world tour. Photograph: Yui Mok/PA Wire

Justin Bieber has explained to fans why he cancelled the remainder of his Purpose world tour, saying “I want my mind heart and soul to be sustainable”.

After playing 150 concerts across 40 countries during the world tour, Bieber cancelled the final 14, saying he was “just resting, getting some relaxation”. In a message on Instagram, he has elaborated on his reasons.

Perhaps referring to the string of fractious incidents he has been involved with, including punching a Spanish fan, driving drunk in a Lamborghini and being banned from China, he added: “Learning and growing hasn’t always been easy but knowing I’m not alone has kept me going. I have let my insecurities get the best of me at times, I let my broken relationships dictate the way I acted toward people and the way I treated them. I let bitterness, jealousy and fear run my life.!!!! ... What I’m not gonna do is be ashamed of my mistakes. I wanna be a man that learns from them and grows from them.!!”

He signed off by apologising for any grammatical errors: “I THINK THERES SOMETHING SPECIAL ABOUT IMPERFECTIONS!!”

With the tour now finished, the statement closes a chapter of his career. His album Purpose spawned a series of colossal hit singles, including What Do You Mean, Love Yourself, and Sorry, which until recently was the most streamed song of all time globally. It was replaced by Luis Fonsi and Daddy Yankee’s Despacito, which Bieber also features on.