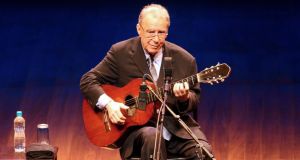 João Gilberto in 2008. The performer is credited with helping to turn bossa nova into a global symbol of a young and confident Brazil. Photograph: Marco Hermes/AFP/Getty Images

João Gilberto, one of the primary creators of bossa nova, the intimate Brazilian music that became a major cultural export, has died. He was 88. His son, João Marcelo Gilberto, confirmed the death on Facebook, although he did not say where or when Gilberto died.

In the music he recorded from 1958 to 1961 – contained on the albums Chega de Saudade, O Amor, O Sorriso e a Flor and Joao Gilberto – Gilberto took strains of Brazilian samba and American pop and jazz and reconfigured them for a new class of young Brazilian city-dwellers, helping to turn bossa nova into a global symbol of a young and confident Brazil.

His new synthesis replaced samba percussion with guitar-picking figures in offbeat patterns (called by some “violão gago,” or “stammering guitar”) and conveyed interiority through a singing style that was confiding, subtly percussive and without vibrato.

“When I sing, I think of a clear, open space, and I’m going to play sound in it,” Gilberto said in an interview with New York Times jazz critic John S Wilson in 1968. “It is as if I’m writing on a blank piece of paper. It has to be very quiet for me to produce the sounds I’m thinking of.”

Gilberto was not much of a songwriter: He was both “less and more than a composer,” as the Brazilian singer and songwriter Caetano Veloso, one of his admirers, once put it. He was reclusive, rarely forthcoming with the news media and his audiences, and sometimes truculent onstage if his demands about sound were not met. But his work became a sign of the relative prosperity, optimism and romance of Brazil during the period of Juscelino Kubitschek’s presidency in the late 1950s, and an ideal of musical restraint and mystery thereafter.

João Gilberto do Prado Pereira de Oliveira was born on June 10th, 1931, in Juazeiro, in the northeastern Brazilian state Bahia, the son of a local businessman and amateur musician, Juveniano de Oliveira, and the youngest of seven children born to Dona Patu, Oliveira’s second wife.

He was sent to boarding school in Aracaju, east of Juazeiro on the Atlantic coast, when he was 11, but left at 15 to play music, serenading locals under a tamarind tree in Juazeiro’s town square.

In his early years Gilberto had a strong, romantic voice, in the popular samba-canção crooning style. He left his hometown for Salvador, Bahia’s capital, in 1949, and a year later he was called to Rio de Janeiro by Alvinho Senna, guitarist for Os Garotos da Lua (the Boys of the Moon), a young vocal quintet with a regular performing slot on Rio’s Radio Tupi.

He was with Os Garotos briefly before leaving in 1951. The next year, recording under his own name with a string section, no harmony vocalist and no guitar, he made one 78 rpm single of rather mannered and old-fashioned samba-canção: Quando Ela Sai on one side, Meia Luz on the other. It would be six years before he recorded again.

In the intervening period, he worked sporadically around Rio – accompanying singer Mariza, recording commercial jingles, taking jobs in a few long-running nightclub revues. According to Ruy Castro’s Chega de Saudade (1990), a colourful history of the bossa nova movement, he also became a strange and marginal figure around town.

When he started refusing to work at clubs where he felt the customers talked too much, he entered a period of poverty, growing his hair long and wearing wrinkled clothes. A friend, singer Luís Telles, brought him to the coast town of Porto Alegre for a while and put him up at a respectable hotel; through his performances at a local nightclub, the Clube da Chave, he gained a following.

After about seven months Gilberto moved to Diamantina, a city in the mountainous state of Minas Gerais, where his older sister Dadainha lived. This was where he found his sweet spot of artistic isolation, cloistering himself in his sister’s house – specifically, in her bathroom.

It was there, Castro wrote, that Gilberto’s sound took shape. The acoustics were reverberant enough for him to practice a whispery, nasal style of singing, audible over the guitar. As much as he liked self-assured performers, his own sound seemed to shrink from the light; it was an inversion of the popular bolero-like style that had dominated Brazilian popular music since the 1930s.

In a 1971 interview with journalist Tárik de Souza, Gilberto cited Dorival Caymmi’s 1955 song Rosa Morena as one inspiration during this formative period: “I felt that the way other singers prolonged the sounds ended up hurting the natural balance of the music. By shortening the sounds of the phrases, the lyrics fit perfectly within the beats and ended up floating.”

After a short and unhappy detour to Bahia – he spent a week being examined at a mental asylum in the capital city, Salvador – Gilberto returned to Rio in 1957, and his fortunes changed. He was introduced to Antônio Carlos Jobim, who was working as a staff arranger for Odeon Records; Jobim heard Gilberto’s guitar rhythm and had ideas for how it could be applied to his unfinished song Chega de Saudade.

That song – which displayed a casual disdain for the favourite Brazilian emotion of saudade, or longing – was first recorded in May 1958 by Elizete Cardoso, with Gilberto on guitar. This was the first great example of bossa nova guitar style: syncopated, swinging, rendered in changeable patterns.

“He imitated a whole samba ensemble,” guitarist Oscar Castro-Neves would later tell Chris McGowan and Ricardo Pessanha, the authors of the 1998 book The Brazilian Sound, “with his thumb doing the bass drum, and his fingers doing the tamborims and ganzás and agogôs” – the tambourine, metal shaker and bell of a percussion group. The song was recorded again that same year by the vocal group Os Cariocas, again with Gilberto on guitar.

Finally, in July 1958, Gilberto recorded his own version, in a long, contentious session with arrangements by Jobim at which he insisted on separate microphones for his guitar and his vocals, unusual at the time. The single, with an entirely different affect from his romantic style of six years earlier, has often been cited as a turning point in Brazilian culture.

Singer Gal Costa, 12 years old when that record came out, later said that “it changed my life, and not only my life but the lives of everyone in my generation.” In his book Tropical Truth (2003), Veloso called it “the manifesto and the masterpiece of a movement: the mother ship”.

Bossa nova was featured in the soundtrack of the 1959 French-Brazilian film Orfeu Negro (Black Orpheus), which won the Academy Award for best foreign-language film, and soon American musicians were investigating and emulating its sound. The album Jazz Samba, by saxophonist Stan Getz and guitarist Charlie Byrd, was strongly influenced by Gilberto’s recordings; released in spring 1962, it eventually reached No 1 in the US, and Gilberto travelled to New York for the first time in November 1962 for an appearance at Carnegie Hall as part of a bossa nova package concert.

At the same time, in pop songs such as Eydie Gormé’s Blame It on the Bossa Nova, bossa nova meant something different: exotic and slightly upmarket, with a newly American-made social dance to go along with it. By the end of 1963, ethnomusicologist Kariann Goldschmitt has written, the phrase had been used to advertise “cashmere sweaters, throw rugs, ice cream and new haircuts”.

The Girl From Ipanema

With Astrud Gilberto, whom he had married in 1959, Gilberto took up residence in the US in 1963. That year he collaborated with Getz on the album Getz/Gilberto, which included the Jobim-de Moraes song Garota da Ipanema, sung by both Astrud (in English) and João (in Portuguese); released as The Girl From Ipanema, the song became an enormous hit and won the 1964 Grammy Award for record of the year. (Getz/Gilberto was named album of the year.)

After divorcing Astrud and marrying another singer, Heloísa Buarque de Holanda, known in her own career as Miúcha, in 1965, Gilberto moved to Weehawken, New Jersey, and then to Brooklyn. In 1970 the couple relocated to Mexico, where during a two-year stay he recorded the album João Gilberto en Mexico. He then returned to the US, where he stayed until returning to Brazil in 1980. (Gilberto and Miúcha separated in the mid-1970s.)

Gilberto lived an extremely private life in Rio de Janeiro, which fascinated the Brazilian news media. In 2004 he had a daughter, Luisa Carolina, with his manager, Cláudia Faissol.