The beat goes on: Guinness Cork Jazz Fest gets a reboot 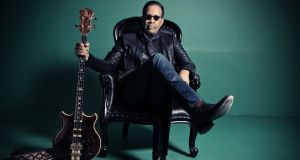 Fusion bassist Stanley Clarke will bring his band to the banks of the lovely Lee for the Guinness Cork Jazz Festival, running over the October Bank Holiday weekend

In jazz’s journey towards artistic respectability in Ireland, the “good-time” image of the island’s principal jazz event hasn’t always been helpful. Good times were certainly on the agenda of the original committee when it planned the first Cork Jazz Festival in 1978. The brainchild of Jim Mountjoy, marketing manager at the Metropole Hotel, a festival of jazz was seen as a way to fill empty beds and bar stools in October, and when Guinness came on board as sponsor a few years later, the link between “the jazz” and “the crack” became more explicit.

Over the years, the artistic quality of the line-up has waxed and waned as the festival has chased audiences. Giants of the music such as Ella FitzGerald, Dizzy Gillespie and Sonny Rollins have all visited the banks of the Lee in the last 40 years, but generally not when they were at the height of their powers.

It was usually down the bill where the more progressive players were to be found, but the circumstances of their performances – in crowded and noisy function rooms – were often less than ideal, and the impression of a festival that cared more about commerce than art grew amongst supporters and stakeholders of the music in Ireland.

It didn’t help that, as time went on, Irish jazz musicians fell further down the bill, or off it entirely, their places increasingly taken by visiting bands with kipper ties, exotic headwear and tiresomely “hep” names that played to an audience that neither knew nor cared what was happening in contemporary jazz.

During the 1990s and 2000s, this paper’s then jazz critic, the venerable Ray Comiskey, was withering about the festival’s programming; the past decade has seen a descent into blandness, the nadir of which was festivals headlined by non-jazz artists such as Gary Numan, Bell X1, and The Boomtown Rats.

But the news earlier this year that Diageo had appointed a new festival director, Waterford native Sinéad Dunphy, has created a sense of anticipation amongst the island’s jazz community, and this year’s programme (see below) certainly gives some cause for optimism.

Dunphy arrives in the role with little or no jazz baggage (she was previously director of the Cork Choral Festival) but, to her credit, she is quick to admit it, ready to learn and to listen, and sees her relative inexperience as a jazz programmer as a positive.

“When I was appointed in January, there was a lot of naysaying, like, ‘What do you know about jazz music?’ And I say, ‘Well what did I know about choral music?’ and I ran that for six years. It’s about what you can bring to the table as an organiser.”

Dunphy, who has lived in Cork for the last 20 years, admits that the festival “had gone quite a commercial route” in recent years, but says that when she presented her idea of a renaissance to the sponsors, they were immediately receptive.

“They have been and are still so supportive,” she says. “In my years of working in the arts and not-for-profit sector, I have never seen such a philanthropic sponsor in my life. They are so committed to Cork and the region, and they are giving me autonomy in creating a festival that is best for the region. So there’s real support for that renaissance idea.”

At the core of Dunphy’s vision is audience development. She notes the ageing demographic of the audience for certain strands of the festival, but sees the potential to bring a younger audience to contemporary jazz.

“It’s just about being a little more innovative and thinking outside the box, really, and looking at how we can develop a very clear audience. If you look at the Metropole programming this year, there’s a lot more Irish artists in there, there’s a lot more upcoming groups from the UK or France, loads of different countries involved, but they’re all jazz, absolutely sticking to the jazz remit, rather than what might have been seen as maybe wedding bands.”

If Diageo or Guinness weren’t there, the festival would not exist as it is

There are those who will still raise an eyebrow at the idea of a major arts festival being owned and managed by its title sponsor – Dunphy reports to Diageo, not to the Festival committee – but the new director insists that Guinness have been entirely supportive of her plans.

“Ultimately this comes down to very simple maths,” she says, pragmatically. “If Diageo or Guinness weren’t there, the festival would not exist as it is, and I think that’s what we in Cork need to be thankful for, because the money would not be there from the local authority or national authorities, unfortunately, and that’s a major issue. I think that’s why it’s a good thing that Diageo have given me such autonomy in terms of a new vision and a new programme.”

Dunphy’s first programme is a promising start, with room for domestic talent, a new artist-in-residence position and an outreach programme to young musicians in the city. Of course, the good times will continue to roll (and good luck to them) and the pub trail fringe will continue to cater to the kipper tie brigade. But, with a credible programme back at the Metropole, a headliner bill that includes composer Maria Schneider’s orchestra of New York heavyweights, and Triskel’s always-enlightened ECM weekend, jazz hope springs eternal on the banks of the Lee.

The first appearance in Ireland of the renowned Maria Schneider Orchestra, on Sunday at Cork City Hall, is a signal of intent from new festival director Sinéad Dunphy. Schneider is one of the most respected composers and big band leaders in contemporary jazz, and her orchestra features some of the New York scene’s brightest stars, including saxophonist Donny McCaslin, guitarist Ben Monder and pianist Frank Kimbrough.

McCaslin, heard by millions on David Bowie’s swansong Blackstar, will also lead his own quartet in a double bill with star US vocalist Nnenna Freelon, while respected UK session saxophonist and producer Paul Booth’s Bansangu Orchestra brings the world music melting pot of London to Cork.