Sinéad Dunphy’s first programme, in October 2018, was widely regarded as a success 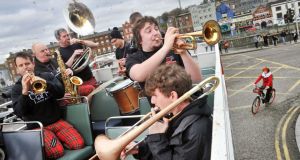 The future direction of Guinness Cork Jazz Festival is in doubt after the departure of its director, Sinéad Dunphy, after just a year in the role.

Dunphy confirmed that she no longer holds the post. “Verve Marketing Ltd, who represent Diageo, have terminated my three-year rolling contract. I have been left with no option but to place the circumstances of my termination in the hands of my solicitors. And in the interim I’d like to thank everyone for their overwhelming support.”

Diageo, which owns the Guinness brand,  released a statement that said she will not be involved in this year’s festival.

Tony Sheehan, artistic director of Triskel Arts Centre, one of the event’s main venues, said: “Sinéad ... is shocked and upset and bewildered by this, as are we all.”

Cork’s jazz festival is one of the biggest in the world and a major boost to the city’s economy, worth an estimated €45 million a year, but it had been criticised in years the years before Dunphy for programming nonjazz acts such as The Boomtown Rats and Gary Numan.

Dunphy, who had a three-year rolling contract, came to her post promising a “renaissance” at the 40-year-old event, and her appointment had been welcomed by musicians, festival stakeholders and Cork businesses; many saw it as an opportunity to move the festival back to its glory days, when giants of jazz such as Ella Fitzgerald and Dizzy Gillespie performed in the city.

Her first programme, in October 2018, was widely regarded as a success, with a bill that combined top international jazz acts, such as Maria Schneider, Donny McCaslin and Stanley Clarke, with a new generation of Irish jazz artists, including Chris Guilfoyle’s Umbra quintet and the trombonist Paul Dunlea, the festival’s inaugural artist-in-residence.

Dunphy, who had previously been director of Cork International Choral Festival, publicly represented the jazz festival as recently as last month, when it received a Cork Business Association award. Diageo yesterday thanked her for her contribution and said it wanted to “maintain the momentum achieved over the past number of years”.

Dunlea said he had not heard from the festival since before Christmas and did not know whether some parts of his residency, including international tour dates, and a gala concert with the star US vocalist Kurt Elling at this year’s festival, would be going ahead.

Dunphy’s abrupt departure also surprised musicians she had programmed at the event. After receiving an out-of-office email reply saying that Dunphy was no longer with the festival, the New York-based Irish guitarist David O’Rourke said on Facebook: “I have a big band of the leading New York jazz musicians, along with some of Ireland and the UK’s leading players, plus special guests, holding dates for months now based on an agreement made prior to last year’s festival. Something is off here, but I really hope Diageo/Guinness will keep their commitments to my musicians...”

Dunphy’s departure comes a year after her predecessor, Jack McGouran, also left the role abruptly. He said then that the AMA Music Agency would be taking over the programming of the festival. That proved incorrect at the time, but sources close to the festival committee now suggest that AMA, which has played a role in programming fringe events in the past, may indeed be about to take over the artistic direction of the entire event.

This article was edited on March 8th