The Eagles in Dublin: Irish audiences are ‘the feckin’ best’

Review: Between playing the hits at 3Arena, chief Eagle Don Henley professed the band’s love of all things Irish 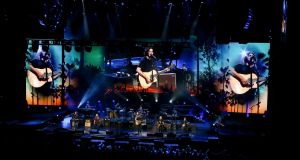 The Eagles performing at the 3Arena, Dublin, on Saturday night. Photograph: Crispin Rodwell for The Irish Times

“We don’t stop playing because we grow old. We grow old because we stop playing.” The George Bernard Shaw quote was delivered by chief Eagle Don Henley at the end of a lengthy show at Dublin’s 3Arena that, curiously, was bookended by a pre-gig announcement seemingly for the benefit of an American audience – “Do not use your cellphones as it could distract other patriots” – and a post-gig airing of the Irish-Scottish folk song, Wild Mountain Thyme. Sandwiched in-between was a show lacking in customary arena pyrotechnics and choreography. “We’re just a bunch of guys playing guitars,” says Henley, laconically. “Outrageous…”

The hoary old chestnut of a story about The Eagles relates to their embittered split in 1980. When one of the members of the group was subsequently asked would the band ever get back together again, the reply was “when hell freezes over.”

Some 14 years later, a live album drolly titled Hell Freezes Over was released. And yet, as we watch the remnants of the group (and some new blood in the ranks) take to the stage at this sold-out show (with another capacity outing on Monday), it does seem as if those old festering wounds have been well and truly healed.

Whatever the issues were way back when, however, there is now an issue where group proprietorship is concerned. With Henley the only co-founding member in the line-up (although, in fairness, present and correct are two long-standing members recruited in the mid-1970s, Joe Walsh and Timothy B. Schmit, an Irish citizen, no less –“it’s good to be back home” he says implausibly – you might wonder what actually constitutes a group identity these days.

In pictures: The Eagles live in Dublin

There is one good pedigree touch, however – from 2017, a regular touring member has been Glenn Frey’s son, Deacon.

Another recognisable addition is Vince Gill, who brings what one could justifiably call an authentic country music voice to a band viewed by many as country rock but which could never scuff the Los Angeles shine from their boots, no matter what the song topics were about.

The mega-million-selling songs are, of course, American classics from a different era. You know them all without, possibly, being fully aware of their titles: Take It Easy, Peaceful Easy Feeling, Tequila Sunrise, Best of my Love, One of These Nights, Lyin’ Eyes, Witchy Woman, Take It to the Limit, Life in the Fast Lane, New Kid in Town, Heartache Tonight, Desperado, and – for which the whooping and hollering audience would surely have genuflected if there had been room – the group’s signature song, Hotel California, which is delivered in a frenzy of nostalgia and liquid guitar solos between Walsh and touring guitarist Steuart Smith.

The two-and-a-half hours show slips by easily enough, but not without a few concerns: the mid-point is listless and self-indulgent, and epitomises a level of passive smoothness typical of legacy bands. This noted, there is an apparent love of performing and – without insincerity – of being in Ireland. When Henley isn’t mentioning WB Yeats, Jonathan Swift, Edna O’Brien and “the immortal” Van Morrison, he is praising – in, let it be known, a strangled Irish accent – the mostly middle-aged audience for being “the feckin’ best.”