A year after a promised renaissance, critics are unimpressed 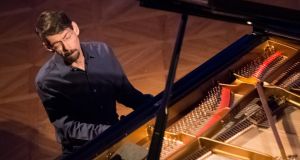 Jazz name: the New York pianist Fred Hersch is among the headliners at the 2019 Guinness Cork Jazz Festival

This week’s news of the headline acts for Guinness Cork Jazz Festival has prompted concern that the event is once more moving away from its roots just a year after promising a renaissance.

The 42nd festival, which takes over Cork city for the October bank-holiday weekend, is set to feature the R&B legends Martha Reeves and the Vandellas and the British soul singer Mica Paris alongside jazz performers such as the US vocalist Kurt Elling, the New York pianist Fred Hersch and the Belfast trumpeter Linley Hamilton. And although they are not mentioned in the press release, The Irish Times has also learnt that the veteran Dublin rock band Aslan are due to appear in one of the festival’s prime slots, the opening-night concert at Cork Opera House.

Founded by a voluntary committee of local hoteliers and businesspeople, the festival has over the years presented some of the biggest names in jazz, including Art Blakey’s Jazz Messengers, Dave Brubeck and Ella Fitzgerald, as well as important contemporary jazz musicians such as Chick Corea, Joe Zawinul and John McLaughlin.

In recent years the festival had been criticised for giving too much prominence to non-jazz acts; headliners have included The Boomtown Rats, Gary Numan and Primal Scream

In recent years, however, the festival had been criticised for giving too much prominence to non-jazz acts; headliners over the past decade have included The Boomtown Rats, Gary Numan and Primal Scream.

Fresh concerns were voiced earlier this year after the surprise departure of the event’s new artistic director, Sinead Dunphy. Her appointment had been greeted with enthusiasm by festival stakeholders, and her inaugural festival, in 2018, was widely regarded as a success.

But, as The Irish Times reported in March, Dunphy was dismissed after less than a year, with no explanation or announcement of a successor. Four months later the reason for her departure remains unclear, and jazz musicians both at home and abroad are unsure whether commitments made during her tenure will be honoured.

The New York-based Irish guitarist David O’Rourke, who has been associated with the festival for more than 20 years, this week expressed dismay at the proposed programme, noting that Martha Reeves and the Vandellas had been given the slot he had originally been asked to fill with an all-star big band from New York. He says he has not heard from the festival since Dunphy’s departure and fears his booking will not be honoured.

Paul Dunlea, the Cork trombonist and bandleader who was announced as the festival’s artist-in-residence last year, and who recently toured Europe with Michael Bublé, was also set to play a major role in this year’s festival, but his name does not appear on the list of performers.

Interestingly, the quotes assembled for the press release from Guinness are largely focused on the economic benefits of the festival and make little mention of the artistic content of the programme.

Fiona Collins, who chairs the Guinness Cork Jazz committee, said they were “delighted to work in partnership with Diageo Ireland, Cork City Council, Cork Business Association and businesses all over the city to create another fantastic weekend programme to be proud of, and it’s a fantastic opportunity to showcase the city and its welcoming vibe to thousands of Irish and overseas visitors”.

The Lord Mayor of Cork, John Sheehan, said that the festival’s “continued success is a testament to the fantastic team ethos that has evolved over the years between Guinness, the festival committee, local government and the local business community”.

However, many in the Irish jazz community are asking whether such a major event on the nation’s cultural calendar should be controlled by its sponsor and apparently programmed without any expert jazz input, or that one of the jewels in Cork’s tourism crown should have such an opaque management structure.

Guinness’s parent company, Diageo, says that “the artistic direction and programming of the 2019 festival is being managed by a team… made up of the Guinness Cork Jazz Festival committee combined with our event partners Verve Marketing and our music booking agents, AMA Music Agency… as well as the Diageo sponsorship team, who, together, have devised an exciting programme of activity”.

It is perhaps revealing that the festival’s commercial sponsor is empowered to issue a statement on behalf of the festival, let alone have a role in its artistic content. One prominent musician compares it to the sponsors of Manchester United being allowed to pick the team. On the basis of the acts announced so far, the statement is unlikely to assuage the fears of those calling for Cork Jazz Festival to live up to its name.

This year’s festival runs from October 24th until October 28th; tickets for the headline shows are on sale at guinnessjazzfestival.com