The jazz musician on his new Christmas album, touring, anxiety and spirituality 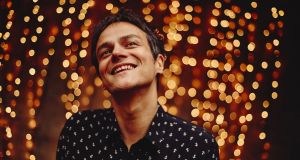 Jamie Cullum’s new album The Pianoman at Christmas is released on November 20th.

In a printed shirt, looking half his 41 years, the record-breaking jazz musician, singer and broadcaster Jamie Cullum leans back in his studio chair amid a distractingly interesting Zoom background: pianos, CDs, books, instruments, guitars are all crammed together in what looks like a musician’s treasure trove.

Cullum bats away its fabulousness with an expected cool. “That’s all the crap I’ve collected over the years. It gets shoved into this room.”

The studio, on the outskirts of London, is where Cullum has spent most of 2020, after the virus that shall not be mentioned made light work of his extensive touring schedule. Dublin, the tour opener, was one of the lucky locations – he played only a handful more dates before the remaining 65 were cancelled within days of each other.

“It was an amazing show as it was, and because it was one of the last I played, it has taken on extra significance now,” he says. “No question, there’s a vibe of music appreciation in Ireland that is there unlike many other places. I know musicians say that all the time but it’s just so obvious when you play that people are just up for it. It’s ringing through my memory of live gigs, even now.”

Once lockdown happened, Cullum went through the stages familiar to many of us: the disappointment, panic and stress, before settling on a renewed appreciation of the core things in life, namely his two young daughters and his wife, writer and former model Sophie Dahl. (He makes sure to clarify that she’s a writer and “was a model many many years ago. I always find it interesting how particular newspapers want to delete the careers of women in a way that’s really reductive.”)

In a more unusual turn of events in the midst of all of this, Cullum won the Ivor Novello in the Best Song Musically and Lyrically category for The Age of Anxiety, with the judges declaring it “beautifully emotive, with an exceptionally crafted melody”.

Taken from his album Taller (so named for society’s fixation with his and Dahl’s height difference), the prescient song is a poignant reflection in these turbulent times, nodding to the texts he kept from Amy Winehouse, to his career insecurities – this is from a man whose breakout album immediately catapulted him to become the UK’s biggest selling jazz artist of all time. Especially with the title but also with its idle neuroticism, it captures a generational mood better now than when it was written 2½ years ago.

“I saw the streaming numbers for the song go up as soon as lockdown began,” he says. “I think songs can be good at predicting the future, perhaps because [as songwriters] we project so much about how we’re feeling collectively. And anxiety is a word that’s used so much now – I heard the word anxious growing up but I don’t think I ever heard anxiety much. Now we hear it 100 times a day.”

Since arriving on the scene as a boy wonder – his first album was released aged 20; he went multi-platinum for Twentysomething aged 24 – he has become known for explored a variety of genres within the jazz/pop realm. (A listen to The Jazz Show, his BBC Radio 2 gig, shows his thorough exploration of the genre.) But his next project is wildly different, in that it’s a Christmas album.

The idea first came about when Cullum worked with Robbie Williams on his own Christmas album in 2019. But lest we roll our eyes with a prospect of another oh-so-swinging rendition of Santa Claus Is Coming to Town, hear this one out.

If there’s a way to rework the seasonal cliches that dials down the cheese and ups the classicism, Cullum has displayed it in The Pianoman at Christmas. The album comprises wholly original songs; a fine example is Beautiful Together, a piano-and-strings Christmas ballad with a lockdown subtext. The poster song for the record is Turn on the Lights, an epic tune that captures the pre-Christmas buzz in the air.

The Pianoman at Christmas was recorded in Abbey Road with as many musicians as they could safely bring into the studios. “There were temperature checks throughout the day. We had to be socially distant; we had to record with Perspex screens between us,” says Cullum.

“My preferred method of recording big bands is the old-fashioned way, which is where you have everyone really close together – you set up almost like you’re on stage, so you have very little separation between the instruments and every microphone is picking up every other instrument. So we had to record in a way that I wasn’t used to but we found loads of ways around it. And for a lot of the guys and girls, it was their first recording session since lockdown, so there was a real collective sense of joy.”

As is its function, the album cover nicely encapsulates Cullum’s contemporary take on Christmas: it’s an evocative shot of himself and Dahl in the back of a car, seemingly on the way home from a Christmas party.

“I was thinking about timeless album covers like Miles Davis’s ESP cover and The Freewheelin’ Bob Dylan, where he’s walking down the street with his girlfriend at the time – those album covers that tell a story where you fill in the gaps yourself. Whilst obviously I’m with my wife, actually I was more interested in that picture setting a scene where you could impress your own story. I didn’t want me on the front cover standing next to a Christmas tree having a small child present or something like that.

“It was also because Sophie has been a huge influence on this record: she was there while I was writing the whole thing, as we were home the whole time. In that sense, it felt very romantic.”

Both the cover and the content are low on religious motifs; the album concerns itself with modern sentiment and new traditions rather than Christmas as a time of Christian celebration. It perhaps reflects Cullum’s complex religious upbringing. His father’s side was Jewish, but he grew up Anglican for fear of religious persecution. His mother was born in Burma and grew up Catholic through the influence of British colonialism.

“I was brought up Catholic, so I did my first communion and all of that but I left it aside when I was 12 years old,” says Cullum. “A combination of Kurt Cobain, Jimi Hendrix and Jack Kerouac confused me enough to throw religion aside.

“While there aren’t a lot of religious elements in the album, there are a lot of hymn references. Where religion played a big part is in the music I heard growing up. So the song How Do You Fly is very much structured and put together like a hymn, like In the Bleak Midwinter or something. We aren’t bringing our kids up religious but I’m fascinated and intrigued by religion. I think it has huge amounts of knowledge to give us.”

His spirituality, meanwhile, “is stronger than ever. I’ve become attuned to it since experiencing death of people around me – friends and family members – since having children and since being in a long term, deep relationship. I’ve discovered the spirituality that is talked about in religion, within Catholicism, Church of England, Islam and Judaism.

“I see how spirituality has been baked into religion, and how there’s a commonality to how we experience death, and birth, marriage, long-term commitment, food, music, rituals, the ritual of Christmas, the ritual of the seasons. The totality of it to me is fascinating.”

There are no plans to tour The Pianoman at Christmas, of course. Cullum plans to  fulfill those 65 postponed dates next year, though he admits it’s a hope rather than a certainty. “My tour is rescheduled to carry on in April next year and from what I can see most people’s tours are aiming for springtime next year.”