Dani Larkin: using music as a baseline for peacebuilding

The singer-songwriter on her new single, living along borders and growing up in Madden 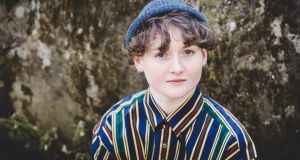 Singer-songwriter Dani Larkin grew up in the rural townland of Madden in the Armagh/Monaghan borderlands. Photograph: Sarah Pannasch 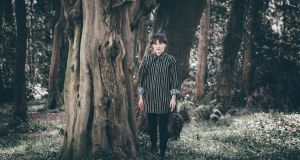 Dani Larkin is about to release Samson & Goliath, a song she wrote in 2015 while studying in Scotland. Photograph: Sarah Pannasch 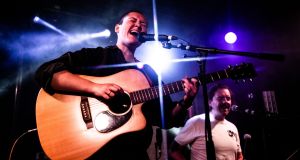 In March 2017 at a concert in Belfast’s Duncairn Centre to mark International Women’s Day, a small, tousle-haired figure carrying an outsized guitar walked confidently on stage to join a line-up of international artists gathered for the Global Youth Peace Summit. She was introduced simply as Dani. When she began to sing the effect on the audience was electrifying.

Singer-songwriter Dani is Danielle Carragher, who grew up in the rural townland of Madden in the Armagh/Monaghan borderlands. A graduate in history and sociology, with a Master’s degree in international conflict and cooperation, she has worked as a peacebuilding and conflict transformation facilitator in Palestine, Israel, Romania, Indonesia and Colombia. For three years she was a #youth4peace ambassador for Beyond Skin, the Belfast-based organisation which empowers activists and peace workers from around the world, using the arts in the development of a more peaceful, equal and intercultural society.

In 2018 she turned freelance, still using music as the baseline for her peacebuilding work and feeding her experiences into the powerful, story-driven songs which are her hallmark.

“My entire conflict transformation practice has been based on music,” she says. “It’s the creative way that allows for the mediation, that allows for things to be transformed. The songs start conversations. One feeds into the other.

“But I got to the point where I realised I was not putting the same energy into my music practice, so I’ve shifted the focus to create my own stamp.”

In the process, she has also changed her name to differentiate her identity as a performer. While researching family history during a residency at Annaghmakerrig, she came across the long-lost surname of her maternal great grandmother and, with permission from her mother and grandfather, she adopted the stage name of Dani Larkin.

She is steadily emerging as a rising star on the Irish contemporary and alt folk scene. In 2019 she was artist-in-residence at Belfast’s Cathedral Quarter Arts Festival and has performed at Ireland Music Week, Output, Other Voices Belfast and Ballina. On the live circuit she has supported Rufus Wainwright, Joshua Burnside and Lisa O’Neill whose “honest, truthful storytelling style” she greatly admires.

Larkin is about to release as a single Samson & Goliath, a song she wrote in 2015 while studying in Scotland. She first played it at a gig in Haifa, where its Old Testament subtext struck a chord among the mainly Israeli audience. This remastered and reimagined version, featuring viola, piano and guest vocal by King Cedar, will be the lead song on her forthcoming debut album Notes for a Maiden Warrior, scheduled for release in spring 2021.

It’s a bittersweet song which connects on several levels. It chimes with the difficult times in which we are living, channelling loneliness and honesty as sources of strength and catalysts for change. As well as invoking the biblical story of the confrontation between a plucky shepherd boy and a mighty warrior, it summons up a nostalgic, iconic image from home, the towering, yellow twin cranes of the Harland and Wolff shipyard, known affectionately as Samson and Goliath.

“I’m very connected to my place of home in Madden,” she says. “My family are there, my grandparents live there and I love them so much. They are a big part of my music and my identity. I stand on their musical and moral shoulders. My grandad was in the showbands. He played the trombone. I tried learning it from him last year but it’s a hard instrument to play. It takes a lot of patience. I haven’t quite got there with it but I’m determined. I’m very proud of where I’m from. In my adult life, I’ve lived in a lot of different places and my base has become Belfast. But Madden will always be home.”

In the course of her working life, Larkin has experienced life along several borders. One wonders whether her upbringing in two neighbouring counties in the province of Ulster has sharpened her perceptions and coloured her songs.

“Absolutely. The border is inherent in the album. It’s very normal for me to be thinking in two jurisdictions at the same time, being aware of two systems of government, two arts scenes and being slap bang in the middle of them. To me it’s not about two, it’s just my experience of how it is, who I am.

“In the album’s title the warrior element comes from the ancient mythological archetype of Ulster as a province, of being this warrior province. You have the hero myth of Cú Chulainn and the curse of Macha. The notes in the title are on how to survive and be a warrior, not in the traditional violent, perhaps masculine, sense. It links back to my work with Beyond Skin and my work in conflict transformation. It’s not intended to be instructional, but it’s this kind of warrior Ulster element that is strong and ferocious and resolute, and how we can channel this energy in a positive way.

“I carry with me every day my experience of the Israel/Palestine border. I try to carry it with hope and light and love but it is exceptionally difficult to do. I have seen what borders can be in the most despairing of ways and how people can behave towards other humans. It’s heartbreaking. In this album those things are being expressed.”

She explains the way the album’s structure follows a strong narrative arc, with each song representing the chapter of a book. The story begins in darkness, inches into light and ends on a note of mystery.

“It’s my narrative, my story. It’s about various aspects of my life”, says Larkin. “It’s very honest. It’s about a state of vulnerability. The notes are the songs. The maiden aspect ties in with folklore and the first stages of femininity and womanhood that I was entering into. And then, there’s this warrior. She’s here, here I am, watch me roar. I have things to shout about and in this roar are so many lessons on how to create change in this world.”