Other acts include Diplo, Tyler, The Creator, Post Malone and Cardi B 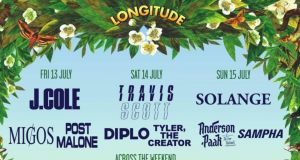 The first round of acts have been announced for Longitude this year, including J. Cole, Travis Scott and Solange. Other acts include Cardi B, Grammy-nominated rap trio Migos, Tyler, The Creator, and Solange (also known as Beyoncé’s little sister).

Twitter users such as the Rubberbandits have commented on the announcement, but the comedy pair’s enthusiasm faded following comments by other users saying they hadn’t heard of the acts.

Holy Fuck, that's a line up. It's so good I first thought it was a joke https://t.co/7ds0TOVY0I

For all the people saying they haven't heard of the acts. Just pick a big name like Kendrick, Solange, Drake on Spotify. Then shuffle through the related artists for a few hours, and pick what you like. You'll arrive at the majority of this Bill. Easiest way to find new artists

The full list of acts announced so far is available below.

Tickets go on sale Friday, February 16th at 9am.

Mica Paris: ‘Bankruptcy just means you made too much money’