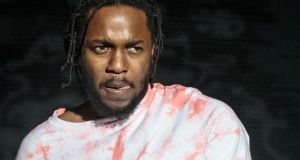 When Kendrick Lamar first played Dublin in 2013, the walls of Vicar Street were heaving. Back then, his second album Good Kid, m.A.A.d City was still considered a new release and he was a rapper at the brink of something astounding - culturally and socially. But tonight, in front of a full house in Dublin’s 3Arena and celebrating the mighty success of his fourth album, Damn, he’s a star of seismic levels.

The first night of the European leg of the Damn Tour starts with a short film, the first of three, which sees our protégé, Kung Fu Kenny, immersed in an 80s-styled, martial arts B movie in which he must go on a quest to find his Glow, mastering a few skills along the way. On stage he keeps a poker face but these interludes are pockets of humour in an otherwise intense performance.

A bang of pyrotechnics snaps us out of the film reel. As wisps of smoke fill the floor, Lamar, dressed all in black, is on one knee with his head down. He holds the arena’s attention by staying statuesquely still, with the noise from the ground swelling to breaking point until DNA explodes into action, followed up by Element, King Kunta and untitled 07. It’s a high-powered assault of brilliance, with each song met by thousands of voices spitting every single word right back.

With the band offstage, he has the entire stage to himself, while rigs move tectonically; tilting and rotating and manipulating the frame. At one point, the lid of the stage narrows down to the floor, turning his performance space into a giant ice cream sandwich from the future. The visuals are kept simple so the messages have maximum impact. When m.A.A.D City, a song about fatal gun shootings in his hometown of Compton, fades out, the words “ain’t nobody praying for me” flash across the screen, a message reinforced later in his 2015 single Alright, which tears into systematic racism and police brutality in America.

Meanwhile, Kung Fu Kenny unlocks the secret to his success. The final short film of the performance doubles up as a sermon. With the assistance of an Afro-ed lady, he discovers that “Where the black is darkest, the glow will shine brightest”. Ever the sceptical superstar, the shorts hint that he’s found his peace as an artist. “Kung Fu Kenny found the motherf*ckin’ glow, hoe.”

When Lamar isn’t performing, he’s a man of few words. He occasionally breaks character to smile and take in the crowd’s adoration, especially during Humble where he lets them carry the song, until he restarts, demanding that we “turn this up to 20”. It’s supposed to be the final song, he tells us, but he doesn’t care he’s gone over time; he has to say thank you. Having spent some time in Dublin, working out in FlyeFit gyms and seeing SUBSET’s mural of him on Aungier Street, he says that it’s the first time he’s “got to get up close and personal” and he appreciates us. Closing the show with God, he quietly walks offstage.

In the frantic and ever-changing sphere of pop culture, Lamar has been a consistent beacon of musical sense. With performances like this, it’s more than just artistry and he’s more than one of the greatest rappers alive. This is a generation-defining performer at the top of his game. If Lamar/Kung Fu Kenny has only just found his glow, at 30 years of age and five albums into his career, then we ain’t seen nothing yet.