Paul Simon announces that he is to quit touring 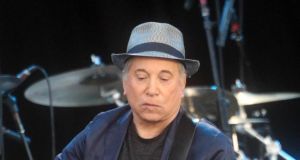 Paul Simon: ‘I feel the travel and time away from my wife and family takes a toll that detracts from the joy of playing’. Photograph: Lewis Whyld/PA Wire

Paul Simon has become the latest major artist to announce that he is to quit touring.

Simon (76) has announced his Homeward Bound — The Farewell Tour, which will take him to the US and Europe next summer, will be his last. It will be a greatest hits tour incorporating the songs that made him famous in Simon & Garfunkel and also as a solo artist.

His second last scheduled concert will be on Friday, July 13th, at the RDS in Dublin.

In a statement, Simon said the tour would bring his performing career to a “natural end”.

He cited the loss of his guitarist, Vincent N’guini, who died in December as a contributing factor to his decision. N’guini had been his guitarist for 30 years.

“His loss is not the only reason I’ve decided to stop touring, but it is a contributing factor,” explained Simon.

“Mostly, though, I feel the travel and time away from my wife and family takes a toll that detracts from the joy of playing. I’d like to leave with a big thank you to the many folks around the world who’ve come out to watch me play over the last 50 years.”

Simon added that he anticipates playing the occasional performance after this farewell tour and to donate those earning to various philanthropic organisations “particularly those whose object is to save the planet ecologically”.

Last month, Elton John also announced that he was quitting touring though his tour, which will last three years, is much more extensive than Simon’s.