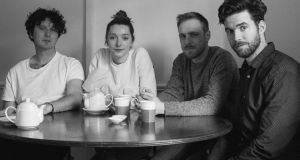 “Having left Maynooth University in 2008 with a degree in music technology, I moved into a gaff with my close friends in Drumcondra. The downturn was well underway and I was hopping between the dole queue and packing hampers in a warehouse for an online gift shop.

“Stealing the neighbour’s internet was standard and we were exposed to an incredible amount of music online via Myspace.

“I can clearly remember the first time I heard Burial’s second album Untrue. My friend called me up to his room where the decks were located and played Archangel. I had never heard music so visual before. The album paints a picture of grimey, inner-city London life through its use of found sounds and off-kilter rhythms.

“Untrue became the soundtrack to my Dublin Bus journeys to the warehouse and I used to love waking up to horrible cold rain because the more rain that pounded the window of the bus, the better the album sounded.

“The way in which the album was produced strikes a perfect balance between human and technology. It features a multitude of samples of very famous songs by huge pop artists but instead of sampling the artists themselves, Burial sampled YouTube covers of people playing the songs usually recorded on their phones.

Whilst living in London, I once got on a bus armed with Untrue and some headphones and stayed on the bus for its whole route through inner city London and back again. It was heavenly.