The Script play 3Arena later this week, but what was their Belfast concert like? 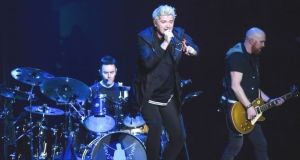 Five albums and as many world tours in, The Script have long sussed out exactly what their fans want. The third date of their Freedom Child UK and Irish tour, Wednesday’s sold-out performance at Belfast’s 11,000 capacity SSE Arena is a pop masterclass that sticks firmly to that agenda.

Following a strong opening by London artist Ella Eyre, whose slick midpoint between R&B, pop and tropical house peaks on Together, Rudimental collaboration Waiting All Night, and closer Came Here For Love, tonight’s main event begins with smartphone clips of Script fans from around the world waxing lyrical on what freedom means to them.

With all eyes firmly locked on stage, a curtain drops mid-arena to reveal half of the band, including frontman Danny O’Donoghue, opening on Superheroes. Segueing into Rock the World and the trad-leaning pop hoedown Paint The Town Green via a light show and confetti explosions normally reserved for an encore, this swiftly feels like a homecoming celebration.

Highlights from last year’s Freedom Child – a release in which The Script embraced modern production trends head on – feature heavily. With it, crowd participation is unwavering. Three years ago, dancing at a Script gig wasn’t necessarily on the agenda. Tonight, it feels borderline obligatory.

@thescript were absolutely amazing in Belfast last night loved every second of it! #FreedomChildTour pic.twitter.com/9VJo5yTOsf

A song which O’Donoghue notes is about “Changing your life and setting yourself on the right path”, It’s Not Right For You soon proves an early peak before Wonders sees the frontman sit at a strobe-embedded white piano (think John Lennon circa Imagine via 2001: A Space Odyssey) to guide one of tonight’s many mass singalongs.

With several forays into the crowd, including a stripped-back section in which members of the band “busk” older material among the audience, O’Donoghue and co. grasp every opportunity to put their fans centre-stage.

No corner of the looming, far-reaching SSE Arena feels neglected. Navigating the room on The Energy Never Dies, O’Donoghue poses for selfies, hugs and high-fives fans, all while delivering the vocal without a hitch. It’s hard to conceive of a band of The Script’s stature in which the divide between fan and frontman is so imperceptible.

While there’s no overlooking the compositional uniformity underlying The Script’s pop-rock craft (but that’s a story for another day) when it’s this potent, one can’t deny the band their reward.

This performance is a slick, cynicism-crushing blitz of pop bravura that confirms The Script’s steady transition from fast-rising contenders to arena-worthy heavyweights.