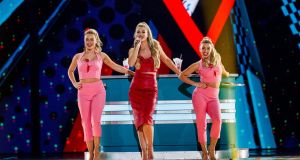 Sarah McTernan on stage performing at the Eurovision on Thursday in Tel Aviv. Photograph: Andres Poveda

Ireland has failed to qualify for the Eurovision Song Contest final for the fifth time in six years despite a professional performance from Sarah McTernan with the song 22.

Ireland’s act failed to send a buzz through the Tel Aviv Expo in contrast to some of the more catchy numbers performed by other countries, such as Norway, and two of this year’s favourites the Netherlands and Sweden.

McTernan and her two support singer-dancers gave their best at the Eurovision second semifinal, but it was not enough.

“You know I felt really happy in myself,” McTernan said. “One thing I really wanted was to be happy and comfortable with the performance and you know what? I was happy. All the team worked so hard and I’m absolutely grateful. Things don’t always go your way but we’re looking on the bright side . . . Thank you so much to everyone back in Clare for all the posters and everything . Honestly, it’s meant so much to me. It’s given me so much energy and support on stage.”

Head of the Irish delegation Michael Kealy said; “Unfortunately things didn’t go our way despite our best efforts and despite a really, really strong performance from Sarah. I thought she did a great job. I thought she sang really well and we put together what I thought was a unique stage performance. It was different, it stood out. Unfortunately we had a strong semifinal, much stronger than semi-final one. It’s a tough competition. It’s not as easy as it once was.”

Like Tuesday’s first semifinal, many of the songs were mediocre or mundane but once again the special effects were breathtaking, utilising lasers and pyrotechnics, together with smoke and wind machines to provide a magnificent spectacle for the enthusiastic, multinational crowd.

The European voters, half from televoting and half from national juries, chose North Macedonia, the Netherlands, Albania, Sweden, Russia, Azerbaijan, Denmark, Norway, Switzerland and Malta to advance to the final from Thursday’s event.

Ireland was one of the 8 countries which failed to make the cut.

The 10 winners from each of the semifinals will now compete in the final along with the Eurovision big five (France, Germany, the United Kingdom, Spain and Italy) and hosts Israel.

The interval act featured one of Israel’s most popular music acts, the Shalva Band, who sang A Million Dreams.

The Shalva Band is comprised of eight talented musicians with disabilities, who have performed at many dignitary events in Israel, including at last week’s main independence day ceremony.

The band advanced to the finals of Israel’s Rising Star show to select the country’s representative to this year’s Eurovision.

However, when it became clear that the Eurovision schedule would require rehearsals on Saturday, the Jewish Sabbath, the band, which includes religiously observant members, dropped out.

Religious Jews are forbidden to work or drive on the Sabbath and the fact that thousands of staff will have to work over the weekend at the Eurovision event prompted the ultra-Orthodox parties to suspend talks with prime minister Binyamin Netanyahu on forming the new government.

Ireland has a record seven wins but the last victory was in 1996 with Eimear Quinn’s, The Voice. Last year, Ryan O’Shaughnessy became the first Irish act to make it through the semis since 2013.

Before McTernan headed to the Expo Tel Aviv for a final rehearsal on Thursday, her family and friends gathered to wish her the best of luck.

Her proud mother Sinead, who flew in earlier this week, said they were loving every minute of the Eurovision experience.

“It’s such an amazing place. The people are lovely. We’ve got the sea and the weather, and everything’s amazing.”

Sinead planned to watch her daughter’s semifinal act in the arena with relatives who had flown in from all over the world.

Sarah’s 2½-year-old daughter, Mia, was watching with her father in Newcastle and had been given special permission to stay up late to watch her mum perform.