Madonna to perform on Saturday night, having rejected calls not to attend 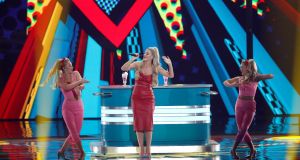 Ireland’s Sarah McTernan performs during a dress rehearsal ahead of the second semi-final of the 2019 Eurovision Song Contest in Tel Aviv. Photograph: Reuters/ Ronen Zvulun

Ireland’s Eurovision entry, Sarah McTernan, takes to the stage in the contest’s second semi-final on Thursdsay in Tel Aviv, hoping to become only the second Irish song to make the finals in five years.

“Everything’s together now. I just can’t wait to get out there and do it and everyone’s on the same vibe,” said McTernan, following Wednesday’s dress rehearsal. She will perform second in Thursday night’s list.

Taking a break, McTernan took a My Heritage DNA test which revealed that she was 94.4 per cent Irish/Scottish/English origin but also has a bit of Balkan and West Asian ancestry, which she said, made her feel “ a bit exotic”.

Despite concerns about calls for a boycott of Eurovision by Palestinian supporters, Tuesday’s first semi-final was considered a great success by the Israeli authorities.

However, a live-stream was hacked to carry a false Israeli Defence Forces warning about a possible rocket attack on Tel Aviv. The hack was quickly taken down.

“We know that at a certain stage there was an attempt, apparently by Hamas, to commandeer our digital broadcast,” said Eldad Koblenz, chief executive of Israel’s public broadcaster Kan.

“But I am happy to say that within a few minutes we managed to assume control over this phenomenon,” he went on.

Meanwhile, singer Madonna, together with a massive entourage, landed in Israel ahead of her performance on Saturday night, where she will sing two songs during the judging interval, having rejected calls not to attend.

The 60-year-old arrived in Israel from London on a private jet belonging to Israeli-Canadian billionaire Sylvan Adams, who is reportedly footing the bill for her performance, estimated to cost €1.3 million.

“Good evening Europe! ” Barzilai proclaimed. “I can’t believe that Eurovision is in Tel Aviv. I had an amazing year, you’ve been amazing to me, welcome to Israel.”

The most visually stunning performance was from Australian contestant Kate Miller-Heidke who qualified with the song Zero Gravity, performed mid-air while suspended on a bendy pole, supported by two backing singers.

Iceland’s rather bizarre metal band Hatari also qualified with their dark techno track Hate Will Prevail. Rumours of a pro-Palestinian gesture by the group on stage failed to materialise.

In Gaza, meanwhile, less than 70km away, Israeli troops wounded nearly 50 Palestinians on Wednesday during protests to mark the 71st anniversary of the “Nakba”, or catastrophe, when many Palestinians lost their homes during Israel’s creation.

Thousands had gathered at the border, planting Palestinian flags and throwing stones towards Israeli soldiers despite the efforts of marshalls in orange vests to keep protesters away from the barrier, according to witnesses.

Wednesday’s rallies were called to mark Nakba Day, what Palestinians term the catastrophe that befell them at Israel’s creation in 1948, when hundreds of thousands fled or were expelled from lands in what is now Israel.

Up to now, the Israeli authorities have been content that boycott calls have not been heeded. In Tel Aviv, however, the Polish ambassador was spat at as he sat in his car in the city by a 65-year-old man, later arrested.