Iggy Pop to headline All Together Now festival 2020 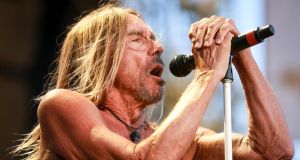 All Together Now 2020: Iggy Pop will play in front of up to 20,000 people over the August bank-holiday weekend. Photograph: Rich Fury/Getty

Iggy Pop is to headline next year’s All Together Now, festival organisers have announced.

The godfather of punk, who with The Stooges influenced a generation of bands, will be giving his first Irish performance for 12 years when he plays in front of up to 20,000 people at the Curraghmore Estate, in Co Waterford, over the August bank-holiday weekend.

The 2020 festival, with runs from July 31st until August 3rd, 2020, will be the third All Together Now. The organisers have vowed to avoid the problems that affected summer’s festival, including traffic jams that meant some festival-goers took nine hours to reach the site.

Tickets are on sale now. A weekend pass costs €220.