Christina Aguilera at 3Arena, Dublin: Everything you need to know 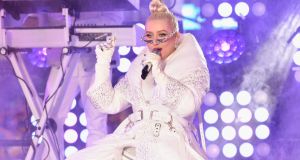 Blame the grandmother: when Christina Aguilera – who plays Dublin’s 3Arena on Tuesday – was knee high to a grasshopper, she began to take notice of the many old soul and blues records her maternal granny was listening to. Like quite a few other six-year-old girls before and after her, Aguilera stood in front of a mirror with a hairbrush in her hand and belted out song after song, striking pose after pose.

In the Pittsburgh suburb of Rochester, she became known as the little lady with the impressively big voice, so it was little surprise that by the time she was eight Aguilera had won her first talent show with a version of Whitney Houston’s I Wanna Dance with Somebody (Who Loves Me). Within three years, she had auditioned for the US variety show, The Mickey Mouse Club, and by the time she was 13 was a cast member alongside fellow ambitious teenagers Justin Timberlake, Ryan Gosling and Britney Spears.

From then to now, Aguilera has rarely been out of the public eye or the record books. While her achievements and influence are impressive enough (five Grammy Awards, one Latin Grammy Award, a star on the Hollywood Walk of Fame, ranked by Rolling Stone as one of the top 100 singers of all time, record sales of more than 75 million, making her one of the world’s bestselling pop stars), Aguilera has gained no small respect for her use (some would say pioneering) of sexual imagery that has advanced conversations on feminism and sexuality.

The album that changed Aguilera from bubblegum to bold was 2002’s Stripped, which mixed overt sexuality with investigations into double standards, and sexism in the music industry. Songs such as Get Mine, Get Yours (long since viewed as a feminist manifesto), Can’t Hold Us Down, and Underappreciated set the unapologetic tone, but it was the album’s standout track, Beautiful, that triggered a game change with its rejection of criteria that are used to define notions of attraction. For many people listening, Aguilera was the voice of a generation.

Matters have changed since then, of course, with some female pop stars influenced by Aguilera taking up similar functions. The likes of Lady Gaga, Katy Perry, and Ariana Grande, to name but three, have at various times in their respective careers either piggy-backed on or leap-frogged over Aguilera’s early ground-breaking stance.

Latterly, Aguilera has become just as known for her philanthropic endeavours as her music. This year, the Human Rights Campaign – the biggest LGBTQ advocacy group and political lobbying organisation in the US – presented to her its All for Equality Award, recognising her as someone who uses her internationally recognised status to “share a message of hope and inspiration” to the marginalised and disenfranchised.

In between many of her human rights responsibilities, however, Aguilera is a pop star open to the vagaries of continued acceptance of her fanbase. To such end she is bringing her X Tour to this part of the world. Essentially, the promotional tool for last year’s Liberation album (“she’s finally found her voice”, said Louise Bruton in The Irish Times; “frustratingly safe”, judged Slant Magazine; “her most artistically emancipated”, reckoned The Observer), the tour dates follow a short theatre residency in Las Vegas. Advance reports suggest some lows (too many costume changes, too many medleys) and some sky-scraping highs: a voice that New York Times critic Jon Pareles outlined as “peaks of self-affirmation, indescribable sensual pleasures, steely counterattacks and abysses of sorrow”.

When does Christina Aguilera play?

She takes to the 3Arean stage on Tuesday, November 5th

Yes but there is very limited availability. Check with ticketmaster.ie and remember to buy tickets only from trusted sources.

Parking is available in the Point Village car park (you can book through Ticketmaster for €13), but better to leave the car at home and use the Luas – get off at the final stop of the red line, the Point. There are usually extra trams on show nights because of the increased demand. The last Luas is scheduled to leave the Point at 12.30am.

Who is the support act?

Finish singer Alma will open the show. The 23-year-old from Helsink has worked with Charli XCX, Tove Lo and and most recently, Miley Cyrus.

What songs will she play?

Here’s the set list from July in Moscow, her most recent concert on the X Tour before her Dublin date:

All bags will be searched at the door. Bottles, cans, selfie sticks, large umbrellas, iPads and other tablets, video cameras, professional cameras, audio recorders, GoPros, large posters (A3 or bigger), large flags on poles, belt chains and laser pointers are prohibited, along with anything that could be seen as a weapon.

Large bags, backpacks and suitcases aren’t allowed into the arena, and there are also no cloakroom facilities.

With all this in mind, best to pack light and just bring what you need.

Note that under-16s must be accompanied by a parent/guardian. Standing over 14s only.

No cameras or recording devices will be allowed into the arena. However, you can bring and use your smartphone.