The best classical concerts and opera of the week 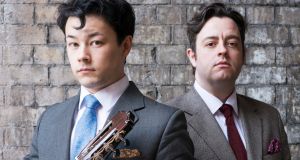 Camerata Ireland
National Concert Hall, Dublin
Six instrumental soloists in an orchestral concert is quite a rarity. But it’s exactly what Barry Douglas’s Camerata Ireland offer at the NCH. Douglas is the evening’s conductor, but plays himself only in Mozart’s Concerto for two pianos, where he is joined by the rapidly rising young Cork pianist Kevin Jansson. The emphasis is on youth in all of the other works, too, with Killian White in Haydn’s Cello Concerto in C, Tom Myles in Mozart’s Clarinet Concerto, and Mairéad Hickey and Ed Creedon joining forces in Mozart’s Sinfonia Concertante for violin and viola.

RTÉ NSO/Anja Bihlmaier
National Concert Hall, Dublin
Swedish composer Anders Hillborg’s Exquisite Corpse of 2002, which opens this week’s RTÉ National Symphony Orchestra concert, lasts around a quarter of an hour. It’s been described as “a rapid charge through Ligeti-complexity, homage to Stravinsky, chorales, hammering urban rhythms, late-romantic string writing with a discreet wink at Sibelius interspersed into the orchestral mist before the end”. Soprano Ailish Tynan is the soloist in Richard Strauss’s Vier letzte Lieder, and German conductor Anja Bihlmaier, who is making her Dublin debut, ends the concert with Brahms’s First Symphony, a work that, as early as a year after its 1876 premiere, was described as a symphony that “really gets to people”.

The books quiz: Zadie Smith is married to which Irish writer?
5

TV Guide: 25 of the best shows to watch this week
9

The Disaster Tourist: Excellent rendering of the extraordinary
10