Hozier’s back with more treasures from the wasteland

Gig of the Week: Six years after Take Me to Church, he is still well able to cry power 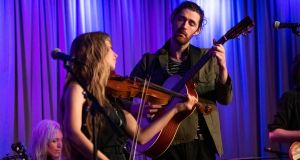 Hozier performs at The Grammy Museum in Los Angeles on on October 23rd. Photograph: Timothy Norris/Getty Images for The Recording Academy

Those expecting Wicklow’s Hozier to fall at the second hurdle have been sorely disappointed. This time last year, he had prepped the release of his second album, Wasteland, Baby!, with the song Nina Cried Power. A decent song with a strong political message, it put Hozier back into the spotlight following a period of time off that was spent simply watching the grass grow, reading books, listening to music, and slowly, surely gathering a second batch of songs.

Talking to this writer around the time of the release of Nina Cried Power, Hozier said he had been looking at writing individual songs, each with its own narrator. The singer of the songs would, of course, be in there, he explained, but so would other characters.

“With the new songs, there are definitely overarching themes of, oftentimes, feelings of powerlessness and hopelessness, a shadow on the horizon.”

There was a lot riding on the second album, especially for a songwriter who is probably the least narcissistic (yet most successful) Irish solo act of recent times. Such was the instant success of his 2014 self-titled debut (“Blessed with a sensual singing voice and a seemingly bottomless well of lapsed-Catholic-style conflict, Hozier channels Van Morrison’s Celtic R&B, Southern soul and Black Keys-style garage blues,” applauded Rolling Stone) that a wait of around five years to release a follow-up seemed cautious at best, unwise at worst.

The song ideas were always there, he told me; it was getting the time during the post-debut promotional blitzkrieg to properly work on them that became an issue.

“There is a personal pressure of knowing you have made somewhat of a mark the first time,” he noted, fully aware that five years is an inordinately long time to take between releasing albums. “To stay in that game is so much harder now, and there’s a sense you have to justify that what happened the first time wasn’t just luck.” Anyone can get lucky, he admitted, observing that having one hit song – a reference to the immense success of his debut single, Take Me to Church, released over six years ago – doesn’t make a career.

And yet here we are at the end of 2019, with another commercially successful album and a bunch of live shows that have increased in force and scope. Although not the most animated of frontmen, Hozier is nothing less than himself and doesn’t peddle the kind of showy bonhomie that we are all too used to squirming at from other music acts of his status; there is courtesy in the man as well as modesty. His shows next week at Dublin’s 3Arena (Tuesday December 10th and Wednesday December 11th) follow well-received open-air summer gigs and a recent residency in New York’s Hammerstein Ballroom.

Irish audiences can expect a few surprises, however: during the NYC concerts – which were draped in a homely fashion with chairs and books laid around the stage, a globe-shaped drinks trolley, and with themed visuals for each song – Hozier debuted new material in the form of blues-based Jackboot Jump, and the piano blues/soul-driven The Wages. Both written on tour, the former is a tribute to protest singers Woody Guthrie and Pete Seeger, the latter a tirade on the rise of everything, except workers’ pay cheques.

Expect, also, further new songs in early 2020. Special guest for the two Dublin shows is UK singer Freya Ridings. Tuesday’s show is sold out. There are mere handfuls of tickets left for Wednesday, which we advise you to nab right now rather than last minute.

Don’t Be Evil: The Case Against Big Tech: Important book on corporate giants
4