Haydn a highlight as orchestral season begins with pleasant surprises 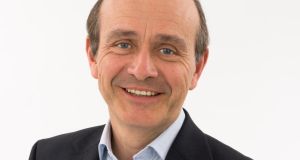 Gábor Takács-Nagy: his Haydn is anything but routine

The new orchestral season got under way in earnest last week: the Irish Chamber Orchestra was in action at the RDS in Dublin on Thursday and the RTÉ National Symphony Orchestra at the NCH on Friday.

The ICO’s principal conductor, Gábor Takács-Nagy, has taken the music of Haydn as a focus of interest, and on Thursday he offered two of the composer’s best-known symphonies, No 101 (the Clock) and No 104 (the London).

His Haydn is anything but routine. Haydn was a composer who liked surprises – witness the famous Surprise Symphony – and Takács-Nagy does too. He takes Haydn at his word when it comes to matters of cut and thrust. He’s happy to encourage shifts that are as momentarily disorienting as a ride over a hump-backed bridge. His approach to phrasing is consistently fresh. And he has a real sense of fun, too, so that his music-making is often both bracing and witty.

Sandwiched between the two symphonies were Wagner’s Siegfried Idyll, music’s most celebrated surprise birthday present, and the opening Lento movement of Bartók’s First String Quartet. Takács-Nagy likes to give spoken introductions before his performances – I’m sure he knows that his enthusiasm is endearing and infectious, and the Hungarian flavour of his English an asset – and he went into some detail about the reason for pairing the two composers.

Simply put, the young Bartók alienated Stefi Geyer, a violinist he had fallen in love with, and for whom he wrote a violin concerto. The concerto remained a secret in Geyer’s possession, unheard for half a century, until after her death in 1956. She had, however, featured elsewhere in Bartók’s music, in the opening movement of his First String Quartet, which Bartók described in a letter to her as his “funeral dirge”. Takács-Nagy sees this as a direct reference to the Liebestod from Wagner’s Tristan und Isolde.

I’m not the world’s greatest fan of upsized chamber music, although the massiveness of Beethoven’s Grosse Fuge when it’s played by string orchestra rather than string quartet, and Schoenberg’s decidedly 20th-century orchestration of Brahms’s G minor Piano Quartet are shining examples of what can be achieved.

On Thursday, the Irish Chamber Orchestra’s handling of Bartók’s ache and pain over a failed relationship was another one. All those years Takács-Nagy spent as leader of the Takács Quartet clearly informed an approach that was as lucid in musical argument as it was deep in feeling. Wagner’s Siegfried Idyll sounded beautiful, but the pacing, which is so difficult in this piece, was not always entirely sure.

The NSO’s principal conductor, Alan Buribayev, is a man who also knows how to surprise. It’s all but impossible to predict exactly how he’ll approach any particular work or area of repertoire. You could see this as straightforward inconsistency

and regard it as an undesirable trait. Or you could take it as an indication that he tries to come to each individual work without preconceptions, and that he’s successful enough in doing so to produce unorthodox results on a regular basis.

Take Richard Strauss’s Ein Heldenleben, the major work in Friday’s concert. If you were to imagine the hero depicted by the manners and sound world of a typical performance, you might see a portly gentleman, rather pompous, and prone to self-congratulation.

Buribayev presented a slender figure, fit and energetic, self-aware, fond of carefully constructed arguments, and with a considerable black streak in his sense of humour. You could say he took a good two decades off the age of the character, who often sounds to be someone in his 50s, when the composer who wrote the piece was only 35. Or you could say that whereas most conductors seem to be ambivalent or a little unsympathetic to Strauss’s hero, Buribayev was completely on his side. The demanding violin solos characterising the hero’s companion were beautifully done by the orchestra’s leader, Helena Wood.

The concert opened with Beethoven’s Leonore No 1 Overture, probably the least often heard of the four overtures Beethoven wrote for his sole opera. The Leonore No 3 Overture is the one that has had the greatest success, so much so that it’s sometimes hard to approach the other Leonore overtures without feeling the use and development of some of the shared musical material has gone awry. Buribayev’s lithe, articulate, carefully-nuanced style served to keep any such comparisons at bay.

The evening’s other work was Sibelius’s Violin Concerto, which may well have been included for a Straussian connection. It was Strauss who conducted the premiere of the work as we know it today in Berlin in 1905. The originally announced soloist, Finnish violinist Pekka Kuusisto, was replaced by Japanese violinist Sayaka Shoji. She showed technique in abundance, but didn’t really get to the heart of the matter.

The NSO’s concert was the third I’ve attended in recent weeks that was dedicated to the memory of the orchestra’s principal viola, John Lynch, and his partner Kevin Devine, who died on holiday in Crete. Clearly, they will be sorely missed.

The NCH series also features two Irish debuts. The Australian Chamber Orchestra appears under its dynamic director Richard Tognetti on October 2nd. And the Orchestra of the 18th Century from the Netherlands plays under Irish conductor Kenneth Montgomery in a programme of Haydn, Field (First Piano Concerto with Finghin Collins playing a Broadwood piano from 1822), Mozart and Handel on November 29th.

This Friday sees Venezuelan conductor, Rafael Payare, a product of his country’s Sistema initiative, give his first programme as principal conductor of the Ulster Orchestra in Belfast. He doffs his hat to the Richard Strauss celebrations (with Till Eulenspiegel), to living composers (Penderecki’s Three Chinese Songs), and the classics (with Beethoven’s Choral Symphony).

And the Irish Baroque Orchestra begins its new season under Monica Huggett at Newman University Church on Thursday 25th with a focus on Bohemian composers of the 18th century. A symphony and a violin concerto by Josef Myslivecek share the programme with a capriccio by Jan Dismas Zelenka and symphonies by Franz Benda and Johann Baptist Vanhal.