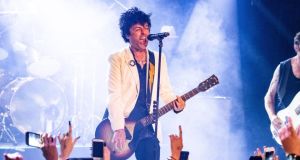 Green Day, Weezer and Fall Out Boy, three of the biggest acts in rock and punk music, have announced a Dublin date for their global arena tour. The bands will perform together at the RDS Arena in Dublin on June 29th, 2020.

The bands have also all released new songs to mark the launch of the global Hella Mega tour, which will see them perform in arenas across North America and Europe.

Speaking to Zane Lowe on Beats1, the Green Day frontman, Billie Joe Armstrong, said that the tour was “kind of a Green Day idea”.

“We talked about how we weren’t really wanting to do stadiums and instead do something that was a throwback to the Monsters of Rock Tour. There was, of course, Fall Out Boy and Weezer, and now we’re stoked,” said Armstrong.