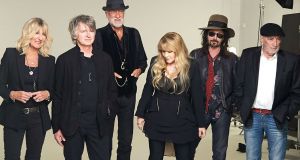 Return of the Mac: Fleetwood Mac will play Dublin in 2019 with their new line-up which includes Niall Finn and Mike Campbell

Fleetwood Mac are to play the RDS Arena, Dublin, on June 13th, 2019, as part of a limited European tour

The veteran rock group are currently touring in the US without guitarist and songwriter Lindsey Buckingham after an acrimonious split. The line-up now features Crowded House frontman Neil Finn and guitarist Mike Campbell from The Heartbreakers, along with Stevie Nicks, Christine McVie, John McVie, and Mick Fleetwood.

“We jammed with Mike and Neil and the chemistry really worked and let the band realise that this is the right combination to go forward with in Fleetwood Mac style,” said Mick Fleetwood said in an interview in April.

“We know we have something new, yet it’s got the unmistakable Mac sound.”

“We are thrilled to welcome the musical talents of the calibre of Mike Campbell and Neil Finn into the Mac family.” the band said in a statement.

“With Mike and Neil, we’ll be performing all the hits that the fans love, plus we’ll be surprising our audiences with some tracks from our historic catalogue of songs,” said the group collectively. Fleetwood Mac has always been a creative evolution. We look forward to honouring that spirit on this upcoming tour.”

The three dates announced on Monday are:

Tickets ago on sale on Friday, October 26th at 9am.