New artist of the week: Hobo Johnson & the Lovemakers 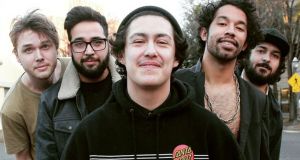 Hearing Frank Lopes jnr for the first time is a jarring and divisive experience. The Sacramento native’s vocal delivery is abrasively hyperactive and delivered in a short-attention-span style like the stoner kid with bum fluff stereotype in a teen movie come to life.

His jerky, jolting performance style is suitable for his stream-of-consciousness lyrics, which are heart-on-sleeve and weave in and out of emo choruses, wry jokes and diverting monologues.

Lopes jnr got his name from the time he lived in his car. He performs with a band of indie-alt-folk musicians called The Lovemakers, and his lo-fi music style harks back to the Moldy Peaches, remixed with hip-hop.

For the best introduction to their energy, watch his performance with his band on NPR’s prestigious Tiny Desk Concerts, which the band got by applying for a public contest. The song they submitted, Peach Scone, quickly picked up tens of millions of views on its own steam. It was recorded in a sunny backyard and typifies their appeal – exuberantly howled choruses supporting Lopes jnr performing a daydream love song to a woman who looked out for him while he was living in his car. She has a boyfriend, and the song is ultimately about a platonic kinship.

Another song, Romeo and Juliet, is about his parent’s divorce and the effect it may have on his future relationships. “The marriage went south / when the snake came back and asked my mother out to dinner / And my dad found out, and asked my mom what that’s about / And she said ‘Oh, it’s nothing’, but dad loves to shout really loud / Loud enough to knock the lamps and dressers to the ground / In my memory, I can hear Chopin’s nocturnes playing in the background.”

You might hate the delivery of Hobo Johnson, but there’s no doubt his conversational stories of life as a youngster in LA are one of a kind.