Lindsey Buckingham sues Fleetwood Mac after being axed from tour

Buckingham claims the tour, which began last week, would have earned him up to €12 million 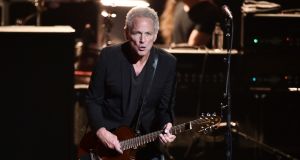 Guitarist Lindsey Buckingham has sued his former Fleetwood Mac bandmates, accusing them of breach of contract for cutting him out of their North American tour and the millions of dollars he would have earned from it.

Buckingham (69) one of the most influential members of the British-American band behind hits such Dont’Stop and Rhiannon and album Rumours, was dropped earlier this year from the tour lineup.

In a lawsuit filed on Tuesday in Los Angeles Superior Court, Buckingham said the dispute stemmed from a clash between the planned 2018/19 Fleetwood Mac tour and Buckingham’s wishes to play some solo dates.

The lawsuit claimed that each member of the group would have earned about $12 million to $14 million(€10.3 million to €12 million) for the 50-city tour, which kicked off last week.

The other band members “intentionally acted to interfere with Buckingham’s relationship with (concert promoters) Live Nation and the prospective economic benefit he was to receive as a result of his participation in the tour”, the lawsuit said.

Buckingham said he learned he had been dropped two days after a Grammy Musicares celebration in New York in January 2018 honouring the main members of the band – Stevie Nicks, Christine McVie, Mick Fleetwood, John McVie, and Buckingham.

“Less than a week after having shared a stage at Musicares, the other members of Fleetwood Mac had suddenly cut Buckingham off entirely,” the lawsuit said.

He was replaced by Mike Campbell of Tom Petty’s Heartbreakers and Neil Finn of Crowded House.

Fleetwood Mac, which first formed in 1967, has been plagued by behind-the-scenes romantic and creative tensions among its members and a shifting lineup over the years.

Buckingham included in the lawsuit a copy of an email he sent to Fleetwood in February, begging the band to overcome its differences.

“After 43 years and the finish line clearly in sight, it is hard to escape the conclusion that for the five of us to splinter apart now would be the wrong thing,” he wrote.

“If there is a way to work this through, I believe we must try. I love you no matter what,” he wrote.

In an interview earlier this week with Rolling Stone magazine, Buckingham blamed Nicks, his former girlfriend, for the rift, saying he was told by the band’s manager that Nicks was angry when Buckingham smirked while she was giving a speech at the January Grammy event. – Reuters