Wexford Festival Opera: An odd idea that shouldn’t have worked

How did niche operas in a remote corner of Ireland become an international fixture? 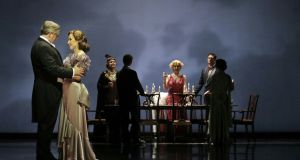 Wexford Festival Opera: ‘Dinner at Eight’, by William Bolcom, gets it European premiere at this year’s event. Photograph: Cory Weaver

It is often said internationally that Ireland punches above its weight in terms of the contribution it has made, and continues to make, to arts and culture on a global level. Never intimidated by the weight of cultural heritage, each new generation of Irish artists continues to reimagine, reinvent and reinvigorate. The arts are constantly changing, finding new forms of expression and igniting new flames.

In such a vibrant and ever-changing arena, consistency can be a double-edged sword and can lead us to question whether it implies stagnation or strength.

When it comes to an event’s core artistic ethos, consistency is more than just a word – it can be the foundation stone without which it would not withstand the ravages of time and turbulence. But with consistency can come over-familiarity. Do we think we know it too well? Do we have a preconceived notion that it either is, or is not, for me? The familiar can sometimes become hidden in plain sight and it can take someone or something to make us take another look.

Wexford Festival Opera was founded on an idea and ethos which still remains at its core today, 67 years later – to present rarely performed operas, to unearth and shine a light on hidden gems.

I was once told by the then chairman of a leading American opera company that the reason Wexford has rightly survived is because from the outset its rationale was plain wrong. He was right: the dream by a small group of local people, including a GP, a hotelier and a postman, in the early 1950s, of bringing international singers to a remote corner of Ireland to present rarely performed operas, wouldn’t even get past the first page of a modern-day feasibility study.

But they weren’t dissuaded, and the minor detail of no real financial underpinning was from the outset not even considered a hindrance. The dream they were determined to see become a reality was enthusiastically shared and championed by the local community, who volunteered their time and skills to this exciting venture.

This is how Wexford Festival Opera began and to this day it remains the core element of Wexford’s DNA, giving it a strong and steadfast anchoring, enabling it to weather the toughest storms. Over the years other elements have been added, but at its core that ethos remains the same.

The festival opened up not just Wexford itself, but Ireland and its arts sector, to the international performing world in a way no other cultural venture had done up until then – nor, I would argue, since. The spin-off has been enormous – artistically, culturally, and economically, generating €12 million annually, a multiple of three times its turnover.

All this can be directly linked back to the festival’s consistent artistic ethos, but it has also led to one of Wexford’s biggest challenges: how to avoid becoming hidden in plain sight? How to keep this hidden gem, which was named Best Festival at the International Opera Awards in 2017, shining as brightly on home turf?

For opera devotees, Wexford is accepted as a byword for a must-go-to event in the opera calendar. But for many others outside this relatively small circle, the festival may be viewed as an event they are vaguely aware of, specialising in an art form they’ve never experienced and have little desire to experience. They may know the name, but that’s it. This is the challenge Wexford faces.

The founding of Irish National Opera is warmly welcomed by those of us who attend and love opera. All of us in the Irish opera community continually strive to attract new audiences, and broaden access to, and the appreciation of, the art form. But like the founders of Wexford Festival Opera, who were not dissuaded by obstacles in the pursuit of their dream, neither will we be. Our invitation to you is to take a fresh look at the festival and join us on the next leg of the journey. I think you’ll be glad you did.