Two operatic B-movies, a stinker of a concept, and some sub-Verdian striving 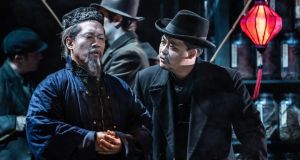 ★★★☆☆
The opening double bill of the 67th Wexford Festival Opera offers classic Wexford fare. The first half of the all-verismo evening introduces a composer new to the festival, Franco Leoni (1864-1949), whose L’Oracolo was first performed at Covent Garden, in London, in 1904. Mala Vita, by Umberto Giordano (1867-1948), whose work first appeared at Wexford in 1987, was originally staged at the Teatro Argentina in Rome in 1892.

Both composers were born in the 1860s, the decade that gave the world Claude Debussy, Gustav Mahler, Jean Sibelius, Richard Strauss and Hugo Wolf. And both, like Strauss, lived past the second World War and into their 80s.

Like the Strauss of the 1900s, both also show a fondness for sensational material treated in a sensationalist way. Strauss, of course, is an astonishingly resourceful A-lister, and the thrills of his Salome and Elektra have diminished not at all with the passing of time.

L’Oracolo and Mala Vita are more like the operatic equivalent of B-movies, set up with stock situations and stock characters, musically buttressed with sure-fire aim and vocal writing that mimics the snarling and swooning of low-grade Hollywood thrillers.

The director of the Wexford productions, Rodula Gaitanou, seems to have found both works somehow lacking in impact. At the ending of L’Oracolo, a tale of lust, kidnapping and multiple murders set in San Francisco’s Chinatown, she upgrades the final murder from a strangling by pigtail that evades the police to an onstage heart extraction with cleaver and a surrender to the authorities.

At the end of Mala Vita the prostitute Cristina is abandoned by Vito, the man who prayerfully vowed in public to renounce his dissolute ways and save the soul of a prostitute by marrying one in the hope of a miraculous cure for his tuberculosis. Giordano’s ending leaves her merely bereft. Gaitanou has her shoot herself in the head.

In truth the directorial approach may only be overstating the obvious: the two works are already too exaggerated to take seriously. The opening-night audience seems to find itself in two places at once, glorying in the full-voiced singing and colourful riches that the conductor, Francesco Cilluffo, encourages from the Wexford Festival Opera Orchestra, and at the same time laughing at some of the preposterous situations and statements on stage.

Musically and vocally Wexford does the works proud, with Sergio Escobar (San-Lui in L’Oracolo and Vito in Mala Vita) providing heroic tenor sounds, and Dorothea Spilger matching him in intensity in Mala Vita as his mistress, Amalia. The audience gives a more enthusiastic welcome to the Cristina of Francesca Tiburzi, whose greater sense of light and shade manages to puncture the prevailing extremes.

The facades of Cordelia Chisholm’s impressive and highly adaptable revolving set (rotated more than a few times too many), and her apt costumes, contribute strongly to the evening’s atmosphere.

Double bill runs on October 25th, 28th and 31st and on November 3rd

★★☆☆☆
William Bolcom’s Dinner at Eight, the second opera of this year’s Wexford Festival Opera, is a coproduction with Minnesota Opera, which gave the premiere in Minnesota in March 2017.

Mark Campbell’s libretto is based on the 1932 Broadway play by George S Kaufman and Edna Ferber that also spawned the 1933 George Cukor film of the same name – the opera was prohibited from using any material unique to the film.

The play, which deals with well-heeled New York socialites, is based around the dinner-party woes of Millicent Jordan (the business and health of whose husband, Oliver, are simultaneously going down the tubes) and the tangled relationships and affairs of her guests.

The set designer Alexander Dodge frames the stage with attractive three-dimensional cityscapes of New York, and creates stylish interiors that are well matched by the chic costume designs of Victoria Tzykun.

The opera’s director, Tomer Zvulun, frames the action with video projections of the everyday misery of the Depression-era United States, images that come across as cheap and crass in the context of the smart and sassy words of the libretto and the status-driven concerns of most of the characters.

Bolcom is, in his own words, a musical magpie. And his aim in Dinner at Eight is to blend the world of opera with the world of the Broadway musicals of the era; a lot of other musical references appear as a kind of garnish on the side. That he has so thoroughly achieved what he set out to do is at once the work’s success and its utter failure.

As an opera Dinner at Eight is a real stinker. Bolcom has set about blending elements that really don’t mix. It’s no accident that most opera singers fail to shine in musicals and that most performers from musicals can’t cut it in opera. For all the cleverness of both words and music, Dinner at Eight falls between stools. The sharpness of the verbal interchanges is rarely caught in any meaningful way by the music, and, sadly, the vocal writing rarely takes flight either.

You can’t blame the wholehearted performances of the large cast – headed by Mary Dunleavy as Millicent, Stephen Powell as Oliver, Craig Irvin as the baddie, Dan Packard, and Susannah Biller as the flighty Kitty Packard – for any of this. Nor the conducting of David Agler, who shows real sympathy for Bolcom’s polyglot style. But in the end the enterprise seems just about as successful as an attempt to breed a penguin that can fly.

★★★☆☆
Saverio Mercadante’s Il Bravo, with a libretto based on a play that in turn was based on James Fenimore Cooper’s novel The Bravo, has one of those opera plots that’s so convoluted it almost makes you lose the will to live.

The work was first performed at La Scala in 1839 and is by a composer whose place in the history books is that of a precursor of Verdi. The New Grove Dictionary of Opera sums his position up nicely. “After Rossini, Bellini and Donizetti he was the most important composer of Italian opera in the period immediately preceding Verdi, on whom his influence was considerable.”

On the other hand the conductor, Jonathan Brandani, seems too eager to breathe fire into the proceeding and tries to whip up storms of a force that the musical material simply can’t deliver on. Enriched orchestration was one of Mercadante’s contributions to 19th-century Italian opera, but Brandani’s approach sometimes actually works against the music by highlighting so many of the ways in which Mercadante has the manner of Verdi but neither the substance nor the dramatic instinct of the younger composer.

There is some strong singing, especially from the chorus and Ekaterina Bakanova as the vocally high-flying and agile Violetta and Yasko Sato as her mother, Teodora, with the pair’s Act III duet providing the highlight of the evening.