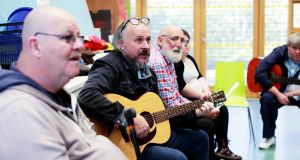 “Sometimes the signal jumps.” It’s a phrase that stops you, not least because it’s not immediately clear what it refers to, and at the same time is evocative.

We’re talking about it over breakfast in the cordoned-off half of a sports hall in the hub of life and activity that is Bluebell Community Centre in Dublin 12.

For the past four years the Bluebell Community Development Project (BCDP) has hosted an open breakfast on Friday mornings. Tommy Coombes, who runs the BCDP, says, “It all started with six older men who weren’t eating. We offered them some breakfast on Fridays. And it grew.” Now 110 or more people can turn up from a wide radius, paying €2 each towards costs, for what has become a vital focal point.

It’s shortly after 9.30am, and people drift in. At long trestle tables in the hall are groups of young adults with disabilities, older men who live on their own and don’t get out much, and groups of women having breakfast before they head to choir practice. There’s chat and busyness and a bit of excitement in the air. Fry-ups and mugs of tea are served from a hatch, with cereal on a nearby table.

“This is our flagship,” says Coombes. “In this space, community development really explodes.”

The breakfast club is about to explode, into a performance of 13 songs and spoken word pieces with strings, and the National Symphony Orchestra (NSO), in the National Concert Hall (NCH). Some eruption.

A couple of years ago Dublin City Council Culture Company (DCCCC) producer Dominic Campbell happened on the breakfast club as part of Tea & Chats community engagement. There, he saw that people “check in when they need to or when they’re going hungry. All are welcome, fed, listened to, heard. It’s a joyous gathering and of real value.” Some in the breakfast club expressed an interest in music, so Campbell brought singer-songwriter Seán Millar along, because of his work combining music with social engagement.

Chatting in the hall, Millar expands on how “sometimes the signal jumps”. It comes from an interview with someone who doesn’t want to be identified, says Millar, “because the activity he is describing is illegal”. People have preconceived ideas about working class communities, he observes. The man has a passion for metal detecting, which is illegal without a licence.

“Sometimes the signal jumps, which means underneath the first thing is another metal artefact, and you have to dig a bit deeper to find it. It has become a metaphor for the whole project,” says Millar, and the spoken word piece, narrated by Liam Burke, gives the show its title.

The breakfast club is like a village every week, with different groupings of people

The breakfast club is, says Millar, “like a village every week, with different groupings of people”, and now the village’s stories and lives below the surface are animated; he quotes again from the Signal piece, “If you don’t look, you’ll never know.”

A while after DCCCC got him involved on Fridays, Millar invited people to talk to him if they wanted to. “All you need is one person to do it first. The question I asked everyone was simple, and easy to answer. What’s your passion? What’s the thing you love the most in your life?” The results were “kind of amazing”.

Breakfast dissolves into rehearsal in the next room, with members sitting in a circle, playing glockenspiel, percussion, guitars. An older man, Ray McGovern, sings about addiction. “Once it takes you/ it won’t let you go/ this addiction . . .” You might make assumptions about what he’s describing, but his passion, his addiction, is to detail and historical fact. “And you would do anything/ to serve the addiction/ cycle hundreds of miles/ to see names on a gravestone.”

May Haverty’s piece is about her lifelong fascination with water – the sea, rivers, swimming, exercise and yoga, the body: “you can’t swim/ if you can’t breathe . . . and it’s my life/ I don’t hurt anybody/ the peace/ the peace that I find”.

“The water is my life,” she tells me later. “I love it.” She says her life was thrown upside-down when her husband died suddenly, at his brother’s funeral. “It was 17 years ago. But it doesn’t make any difference how long ago it was. I didn’t believe I could write poetry, and perform it.” In rehearsal she has a quiet confidence and is very moving.

Sé Franklin speaks about men’s groups, where he and other older men “listen to each other, to give each other good attention, something that we do not get in many places, in fact, for most of us, any other places . . . Sometimes it’s a struggle to say what’s going on, it’s hard to admit that I’m upset.”

Barney Bowes and Paul Holmes, who both work at the Bluebell Community Centre, are also musicians, and will play bass and dobro, and perform spoken word pieces.

Daragh O’Toole scaled Millar’s music up from six musicians to the orchestra, which will lend a complexity of tone and texture to the stories. It’s been a “very open and interesting collaboration” with O’Toole, says Millar, and the NCH and NSO have been supportive and helpful.

Val Scott, who works with BCDP, is sitting at a table in the midst of plates of toast, filling out tickets for the weekly community lotto. She visited the NCH with the club. “You would think, the concert hall, it’s not for me. But amazingly, you’d be surprised, there’s something there for everybody – and they had a Joe Dolan show!”

The lotto offers small prizes and funds activities, part of a mosaic of support since BCDP lost its €136,000 community development funding in 2010. Aiming to act as a catalyst for social change, its other activities range from a men’s group, outreach and art to t’ai chi, allotments, performing arts, and a library.

Watching all this, you think, every area should have a place like this.

Coombes is evangelical about BCDP’s impact on the long-term mental and physical health of the people it serves. “Process for me is all the stuff. That’s massive for us – that the weekly breakfast has led to this, where the concert hall is opening its doors and the symphony orchestra is going to play with these local people’s work. The breakfast has been particularly important for older men living alone, where there’s social isolation, alcohol dependency, family dysfunction.”

He talks about short trips the men’s group organised, to the European Parliament, Birkenau and Auschwitz, and Áras Éanna arts centre on Inis Oírr. “For that they saved €6 each a week. That was 2,000 cans of alcohol sacrificed to get there.”

The NCH performance is important for them, he says, because “it helps them believe they are worth something and can contribute on stage, with the orchestra. Coming from not such a good place, it does a lot for your soul, for mental and physical demeanour and health. It’s so worthwhile to invest in: it keeps people out of hospital and improves lives long term, getting people involved and engaged, writing poetry and song and sharing their stories.”

Coombes’s own story is a song too: “My life was/ so broken up/ it took me/ a lot of years/ to put the pieces/ back together again/ things that happened/ things I did/ but it’s not the drinking/ it’s the living I’ve a problem with.”

Millar observes people often “see what I do, or other artists, as bringing culture into a community. I have found it to be the opposite. I come in and I learn and see things differently. We are musically trying to show that everybody’s life is epic.”

Nobody is quite sure who said it first, but several people echo: “Everybody’s life deserves an orchestra.”

DCCCC aims to help citizens explore the culture of their city, and Campbell talks about how “the notion of writing songs with people coming for breakfast merged into reality”, creating “pen portraits where people find pleasure and joy amid the difficulties of everyday”. It’s “very gentle, and massive at the same time”.

“String quartets came for rehearsals at breakfast and we had a first run-through in July in the gym alongside the raffle and the football. We realised the cellist’s auntie lives down the street, and some of the orchestra started playing at an RIAM community summer school in the 1950s, and some of our older men were gigging musicians, and that the lives of today’s gigging musicians are just as precarious and adventurous. We have so much in common, which is why the breakfast is so important.”

The Bluebell Project: Sometimes The Signal Jumps, the world premiere of new music for orchestra, written, performed and inspired by the lives of members of Bluebell Breakfast Club with Seán Millar, orchestrated by Daragh O’Toole and performed by the RTÉ Symphony Orchestra conducted by Andrew Synnott is at NCH, Dublin on Tuesday, September 17th, 10.30am, followed by breakfast. Free, ticketed event; booking required: nch.ie

Liz Nugent: ‘People have accused me of being brave, but what is brave about surviving?’
9