Review: The loyal Irish fans did their best to raise the roof, but had a job on their hands 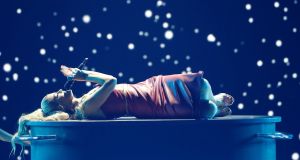 The roof of the Expo Tel Aviv remained resolutely unraised during Sarah McTernan’s Eurovision performance of the song 22 – the second act of Thursday’s semifinal. Ireland’s stab at Eurovision glory was not so much a stab as a light poke.

To be fair to the 25-year-old McTernan, she didn’t have much to work with. The smooth, glossy song, co-written by Janieck, Roulsen and Marcia “Misha” Sondeijker lacks energy, is about as deep as a sparrow’s pee puddle, and feels like airbrushed Instagram come to life.

You know you’re in trouble when Louis Walsh – who, let’s not forget, sent boy-bands out in the world to sing Barry Manilow and Billy Joel covers with a straight face – is calling your efforts a “nothing song”.

“I don’t even think it’s in the top 100 in the charts, which is a bad sign because you have to go to Europe with a hit record under your belt and it’s not even a hit locally,” he noted this week. Ouch.

He might have a point, though. The lyrics - which I’m still trying to comb for some kind of subliminal meaning - go thus: “It’s your house/number 22/Baby, where are you/Number 22/I see 22, oh, it’s like déjà vu/Boy, if you only knew/This time I messed it up, but I can’t give you up/Your face is all I got.”

McTernan herself seems a game enough lass. Looking every inch the contoured pop contender, she is also refreshing, free of airs and graces and has a breezy, “zero sh*ts given” vibe that goes down a storm with interviewers.

Sadly, breezy vibes do not a winning Eurovision entry make. This is the one day of the calendar year where the visuals, energy, lungs and sheer spectacle should have been reaching for the ceiling. Tonight they didn’t come close.

Cometh the hour, McTernan’s performance on the Eurovision stage was certainly colourful, choreographed and slick, but in entirely the wrong ways. The lo-fi amateur set-design doesn’t befit the corniest show in town; 22 was soppy, safe and more “school play” than Eurovision.

This is an audience baying for campy, cutesy and fun. Sadly, McTernan’s performance was self-conscious and soulless, and felt amateur.

The Irish fan contingent, nothing if not loyal, did their best trying to raise the roof, but they had a job on their hands making this musical candyfloss sound like anything resembling a contender.

Alas, Ireland failed to snare enough votes to make it to the final of this year’s Eurovision Song Contest on Saturday night.

North Macedonia were the first country through to Saturday night’s finals, with bookies’ favourites the Netherlands and Sweden following in hot pursuit. Russia, Norway, Albania, Azerbaijan, Switzerland, Denmark and Malta also squeaked through.