Don Quichotte review: Massenet updated, but in no way diminished 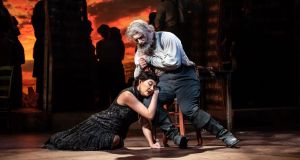 O’Reilly Theatre, National Opera House
★★★★☆
It’s all of 54 years since Massenet’s Don Quichotte was first produced at Wexford Festival Opera. The production, by the veteran Carl Ebert, was well received in 1965. “Every move and gesture had been carefully worked out to make the maximum effect,” wrote Opera magazine.

There was a front-page story in The Irish Times about the shock resignation of the festival’s founding artistic director, Dr Tom Walsh, the outcome of an internal power struggle. And when the programme details were being announced the festival estimated the year’s cost at £18,000, or not quite €23,000.

The Georgian bass Goderdzi Janelidze fills the boots of the stiff-limbed Quichotte with moving, grave tenacity, and the Icelandic baritone Olafur Sigurdarson successfully mines the humour from the protective duties of Sancho Panza

Don Quichotte was first performed in Monte Carlo in 1910, with the great Russian bass Feodor Chaliapin in the title role. In one of his books about Opéra de Monte-Carlo Tom Walsh described the production as providing “the last unqualified success that Massenet would enjoy from one of his operas”.

The work, in a musical language long out of fashion, arrived in a world where Strauss, Stravinsky, Schoenberg, Ives and others had irrevocably redrawn the bounds of musical possibilities.

The Don Quichotte of Henri Cain’s libretto is a do-gooder idealist, and his Dulcinée is a flesh-and-blood character. Wexford’s new production, directed by Rodula Gaitanou with sets and costumes by takis, updates the action into a 20th century in which the well-meaning knight and his ever-devoted squire, Sancho Panza, arrive on a scooter and a moped, both apparently powerless and requiring foot power to get them moving.

The updating in no way disrupts the narrative or undermines the pathos that Massenet’s late creation can generate. The Georgian bass Goderdzi Janelidze fills the boots of the stiff-limbed Quichotte with moving, grave tenacity, and the Icelandic baritone Olafur Sigurdarson successfully mines the humour from the protective duties of Sancho Panza. The Russian mezzo-soprano Aigul Akhmetshina is a sultry Dulcinée with a voice that’s appealingly ripe and fruity, and the festival chorus, trained for the last time this year by Errol Girdlestone, is in fine, full voice.

The American conductor Timothy Myers projects the music strongly, sometimes a little too strongly in a way that focuses attention on the limitations of the material, but always with effective energy. And the whole evening benefits from the way Simon Corder’s lighting bathes the stage in atmospheric hues.