King Princess: ‘As per usual, we’re in a drought of good music’

Singer Mikaela Straus has got the songs, connections and attitude for popstar life 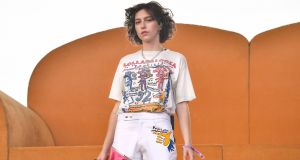 If you were wondering what it’s like to be a young rising pop star in 2019, 20 minutes with Mikaela Straus will give you a rough idea. The New Yorker known to the masses as King Princess is about to make her Irish debut at Dublin’s Academy venue; it’s mid-afternoon, and already queues of adoring fans are forming outside.

“The gays wait. The gays wait, honey,” she says with a knowing nod, having just finished her soundcheck. “Really, that’s what this whole thing is about – just getting out there and delivering the best show possible for these people.”

Straus has yet to release her first album, but she is already a star. Mark Ronson signed her to his Zelig Records imprint after being wowed by her first single, self-styled “lesbian love song”, 1950, which was released early last year (she was also a featured vocalist on Ronson’s latest album). When Harry Styles tweeted lyrics from the same song, things went a little crazy. Even Kourtney Kardashian has sung her praises, while she was the runner-up on the BBC’s Sound of 2019 poll.

Straus is undoubtedly talented, as her various EPs and singles will attest to, but she’s also rather... well, cool. Is it the studied nonchalance that comes as part and parcel of being 20 years old? We can’t decide. Sliding into a booth of the venue’s basement bar, vape in hand, she peppers her conversation liberally with breathless “ohmygods” and racks up more tongue-in-cheek “b***h” references than Breaking Bad’s Jesse Pinkman. (Of 1950, she says “I already knew that that was a big b***h before it came out. We had a meeting about it; we all sat in a room and went ’Guys, this is a big b***h. When is this ho coming out?’.”) Either way, charisma counts for a lot – even when she drops the trope beloved of Americans within seconds of sitting down.

“I’m of Irish descent – my mom’s side,” she says, noting that her mother’s maiden name was Mullaney. “She said ‘Can you put a +10 on the guestlist for your Irish family?’ I was like, ‘What Irish family?!’ She just threw it at me yesterday – ‘You have Irish family’.” She theatrically rolls her eyes. “Like... okay...?”

The other side of her family is a lot more interesting, although she claims not to know much about that, either. Her great-great-grandfather Isidor Straus was the co-owner of the famous Macy’s department store; he and his wife, Ida, died in the sinking of the Titanic.

“Ohmygod, it is the truth. I’m not even kidding, you can Google it,” she says, holding her hands up. “And what’s weird is, the guy who died looks like my dad. The genes are real. The nose is the same. It’s bizarre to look at the history of my family, because it’s so Jewish and rich and deep, and I have little to no information on it, other than what’s on the internet,” she laughs. “We don’t have that many people left on that side to tell those stories, but they’re so interesting. I mean, the f**king Titanic?”

Straus was always destined for a career in music. Her dad Oliver Straus is a renowned studio engineer who has worked with everyone from The National to Pink at his Mission Sound studio in Brooklyn. It meant that the young Mikaela was aware of the intoxicating pull of the music business from a young age, but it also helped to her fiercely independent nature.

“I spent a lot of time drinking and smoking and hanging out with band people – so it was cool, because I think I developed social skills with older people when I was really young,” she says. “But being in the studio, I found people who treated me as an equal and as a collaborator. And when people give you that affirmation as a kid in a studio setting like that, it feels like the whole world.”

She excitedly denies the rumour that she turned down a recording deal at the age of 11.

“I didn’t turn down a deal,” she says. “I was just getting courted by Virgin Records at the time, which has since been dissolved. They were having meetings with me and an A&R woman – who I’m still very close with – asked me to be the voice of this animated character. But then it f**king tanked and didn’t happen. But it was a great moment in my life, because I was like ‘No, we’re not gonna do this. We’re gonna wait.’”

After high school, she traversed the USA to attend the University of Southern California Thornton School of Music, enrolling in the pop programme – but she quit the course after a year, claiming that her burgeoning career was impacting her college work.

“I was on a scholarship getting financial aid, and I just started to feel like I was completely half-assing the school part of it – because this,” she says, sweeping her hand around, “is my job. I’m out here doing sessions late at night, and then waking up for tests, and shit; it was a lot. And there was also a part of me that was going ‘I’m on financial aid, this could be going to someone who really wants a f**king education. I don’t want an education – I’m here just to be in LA’,” she laughs. “My parents were on the same page as me at that point, because school’s really expensive in the States. So it wasn’t worth it.”

‘A drought of good music’

Her King Princess persona took shape in the studio quite early on, and nods to the fact that she identifies as non-binary, as well as the fact that her music encompasses disparate elements; she’s a “rock ‘n’ roller”, she says, but also a pop star. Having been open about her sexuality from the beginning (she was previously in a relationship with Hunger Games actress Amandla Stenberg and is currently dating Lizzo’s creative director Quinn Wilson), she says that it’s an inherent part of her music. Which, you’d imagine, explains her track Pussy is God.

“I think gender queerness is something that I write about whether I want to or not,” she shrugs. “I never write about things in a way that feels like they’ve been filtered to make people understand; they’re just implanted into the music. That’s really important to me. [And] we’ve also come to a place [in the industry] where it’s more ‘Okay, go ahead – you can do that’. As a people, we need to start coming forward with our music and our voices, because as per usual, always, we’re in a drought of good music – so I’m just excited to see what queer people turn out in the next couple of years. Especially with everything going on in our f**king world right now; it’s the perfect catalyst to bring out some really strong queer artists.”

Being signed by Ronson had its benefits when it came to polishing her debut album, Cheap Queen, she says.

“Mark helped out on a couple of the songs,” she nods. “It was great, because I got to elevate what was already there. He would say ‘What do you wanna do?’ and I’d say ‘You know what would be so amazing? If The Dap-Kings played on this, they’re your f**kin’ bros’. So he said ‘Let’s make it happen’,” she says. “He’s just got a really great arsenal of people around him, and they’re all lovely and ready to work on good music. I get a lot of positive affirmation from them.”

There are a host of other big names on the album; Father John Misty plays drums on one song – or, as Straus puts it, “he played some f**kin’ hot-ass Ringo drums on this song”. Tobias Jesso Jr came out of performance retirement to feature on Isabel’s Moments. “I hit him up and was like, ‘Please sing this!’ and he was like ‘Got you, b***h’,” she says. “I was so happy he did it.”

She has the songs, she has the attitude, she has the connections. Pop-star life, it seems, really is all that it’s cracked up to be.

Straus’s eyes widen, as she shakes her head and takes another drag from her vape, blowing a plume of smoke across the table. “No, it’s much more stressful, much more anxiety-inducing,” she says, half-smiling. “But then, also, it’s just important to have good people around you, and not... lose it.”

Cheap Queen is released on Zelig Records on October 25th.