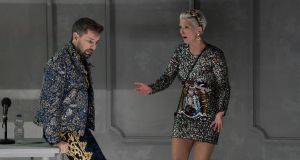 Town Hall Theatre, Galway
★★★☆☆
The harrowing story of Griselda was alarmingly popular in 18th-century Italy, spawning more than 30 operas between the first, in 1701, and this one, by Vivaldi, in 1735, according to Irish National Opera. Seriously, 30 versions?

Because the people consider Queen Griselda unworthy, King Gualtiero inflicts atrocious cruelties on her as a test. He dethrones, denounces and banishes her, announces his marriage to a mysterious new queen and heartlessly orders Griselda to prepare the wedding, arranging for her to become the new queen’s maid and betrothing her to Ottone, whose creepy advances she has previously rejected and who has abducted her little boy and threatened to murder him. She opts to die instead, thereby proving her worthiness. The king takes her back. Everyone’s happy, Griselda included.

Offensive, preposterous baroque plots like this often merely provided a pretext for assembling a sequence of songs, usually lengthy and ferociously difficult. Accordingly, one of this production’s three main triumphs is that all six singers – led by the mezzo Katie Bray as Griselda – are virtuosos. Each calmly navigates Vivaldi’s mercilessly instrumental-style high-speed leaps and running figures with jaw-dropping flair and security, simultaneously communicating anger, heartbreak and inner conflict, among other emotions, with great credibility.

A second triumph is the way their singing is so naturally complemented by the conductor Peter Whelan and the Irish Baroque Orchestra: energy, emotion, baroque sound, not once masking voices.

Paradoxically, the third triumph also contains the only serious shortcoming: the director Tom Creed’s brave effort to tackle and modernise the story. He usefully if tenuously invokes issues such as surveillance, the hazards for women of high standing (citing Meghan Markle), and making sense of unbearable suffering. His ideas are vividly animated by Katie Davenport’s sometimes symbolically garish costumes and her intriguing split-level set: conference-cum-throne room above, underground car park below, complete with security cabin where the creepy Ottone monitors the CCTV cameras that project every angle of the set and various offstage areas on to a bank of oversized screens.

You want to go with it, suspend your disbelief and follow where Creed leads. But early hints of a pantomime vibe gradually proliferate until there is open laughter at supposedly serious moments whose thematic value ends up lost.