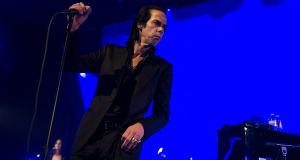 Nick Cave of Nick Cave and the Bad Seeds will play in Dublin i 2020. Photograph: Noel Vasquez/Getty Images

Nick Cave and the Bad Seeds will perform at Live in 3Arena, Dublin on Friday, May 8th next year as part of their spring 2020 European tour.

Regarded as one of the world’s greatest live acts, the Australian rock band was formed in Melbourne in 1983 by vocalist Nick Cave, multi-instrumentalist Mick Harvey and guitarist Blixa Bargeld. The band will perform in 19 countries across Europe. The Irish gig is promoted by Aiken Promotions.

British reviews of Nick Cave and The Bad Seeds live have described their gigs as “joyous and unexpectedly triumphant” (The Guardian), “tense and thunderous at times, tender and cathartic at others ” (the Independent ), and “an extraordinary response to the unimaginable” (Telegraph).

Cave was last here in June 2018. Irish Times' journalist Una Mullally’s review of the Bad Seeds at the Royal Hospital Kilmainham at the time observed: “There is no sloppiness with Cave. Everything is pointed and aimed as an archer, targeting personal connections as he prowls ... but the consolation of tragedy is art, and then the fading light, and the slowly dispersing crowd, soaked in the heaviness of an artist truly transmitting his emotions. And us all there to receive them.”

Cave says the accidental death of his 15-year-old son Arthur in 2015 has led him to “see people in a different way” and giving him “a deep feeling toward other people and an absolute understanding of their suffering”.

He threw himself open to the public afterwards, posting an invitation to talk online – “You can ask me anything” – and later toured a live version of his questions and answers. He included the Q&A at the Dublin’s Abbey theatre while he was in Ireland for the Royal Hospital Kilmainham gig. Patrick Freyne describes “a funny, strange and beautiful evening” at the public Q&A, a mix of processing of grief, music and “joyful sillinesss”.

The Guardian called it a “Stunning double album that sets desperation against empathy and faith” and Rolling Stone “A masterpiece of melancholy”. Vinyl and CD will be released on November 8th.

Concert tickets are on sale from Friday, October 25th, via ticketmaster.ie and nickcave.com

Other European tour dates include: