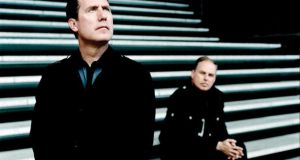 SLIGO LIVE
Various venues, Sligo
You have to hand it Sligo Live – it is, essentially, a provincial festival yet this year it celebrates its 15th birthday. Each year, however, the festival has broadened its programming to encompass comedy, spoken word, podcasts and family events. Music, however, is at its core, and highlights across this and next weekend include Jools Holland and his R&B Orchestra (Knocknarea Arena, Saturday 19th), The Delines (Hawk’s Well Theatre, Thursday 24th), Paul Noonan (Hawk’s Well Theatre, Saturday 26th), Indigo Girls (Knocknarea Arena, Saturday 26th), All Tvvins (Headline Stage @ Andersons, Saturday 26th), and Wild Youth (Headline Stage @ Andersons, Sunday 27th). TCL

ELLYD
Monroes, Galway; also Friday 25, UBH Cafe, Naas, Co Kildare (pay on door)
Dublin singer and songwriter Elaine Doyle has been making solid inroads over the past year with songs such as Close, Say, Sorge, With the World, and her latest tune, Ghosts. An empathetic lyricist who values complementary alt.pop melodies, EllyD doesn’t aim to burn bright and then fizzle out. Rather, she seems to be in it for the long haul, delivering imaginative, sometimes dramatic songs that resonate and stick around. TCL

HIDDEN AGENDA presents: ROMARE (DJ set)
Lost Lane, Dublin
In anticipation of his new record coming out on Ninja Tunes, Archie Fairhurst, better known as Romare, is coming back to Dublin. The multi-instrumentalist and percussion fiend from London is a master in applying the rhythms and melodies of the music that has influenced him over the years to create timeless and euphoric soundscapes for the dancefloor. Joining him on the night as support is Squig, the Dublin DJing duo who specialise in house. This event is expected to fill up quite early. LB

OCTOBER FIRES
The Grand Social, Dublin
Fresh from their triumphant performance in the National Concert Hall in September, October Fires launch their new single Caught In Your Design. A potent combination of choral music, pop, soul, funk, folk and rock, the Kildare four-piece create outstanding atmospherics via impeccable vocal harmonies and menacing melodic grooves. Live, they're a band that get all your senses tingling, and tonight's show is a great way to get the Halloween party started early. Support is from the magical Baby Witch, aka singer-songwriter Clara Marie Tracey.

CRAIG FINN
Sugar Club, Dublin
While US indie band The Hold Steady are on some level of standby, their primary songwriter Craig Finn is off on tour to promote his recently released fourth solo album, I Need a New War. The title is appropriate, as Finn has always had a yen for raking over the coals of life, the universe, and many points in between. Indeed, his perceptive lyric writing has regularly been acclaimed, with Uncut magazine outlining them as “narratives driven less by the wordy exposition of yore than acute observation, devastating detail, by turns exclamatory, epigrammatic and grainily authentic”. Mr Finn isn’t too bad with a tune either. TCL

OF MONSTERS AND MEN
Olympia Theatre, Dublin; also Thursday 24, Ulster Hall, Belfast
Unusually for an Icelandic band (or at least a regular perception of them) Of Monsters and Men are nowhere close to being an outfit whose creative other/ethereal worldview is shaped by the natural beauty of their homeland. Rather, their indie folk/pop is rooted in a somewhat more traditional terrain. Perhaps because of this, the band are immensely commercially successful (in 2017, they became the first Icelandic music act to achieve over one billion streams on Spotify), so it is little surprise to that their Dublin show sold out in minutes. Special guests for both the Dublin and Belfast shows are UK indie rock band Black Honey. TCL

OMD
Ulster Hall, Belfast; also Thursday 24, Olympia Theatre, Dublin
Not many groups that formed in the fiery pits of post-punk have managed to retain their creative spark, but Liverpool’s OMD (neat shorthand for Orchestral Manoeuvres in the Dark) have. Following a 10-year split (1996-2006), the central unit of Andy McCluskey and Paul Humphreys have reunited and released three albums that easily equal the music of their glory days. History of Modern (2010), English Electric (2013) and The Punishment of Luxury (2017) constitute an inspired return to the fray, with the middle album one of the best retro-fitted electro-pop records of recent times. Note: the Dublin gig is sold out. TCL

AMANDA PALMER
Opera House, Cork; also Thursday 24, National Concert Hall, Dublin; Saturday 26, Ulster Hall, Belfast ; Sunday 27, University Concert Hall, Limerick
There is a strong rapport culturally and most other ways between Amanda Palmer and Ireland, so it’s good to see her tour the length and breadth of the country with, nominally, her latest album, There Will Be No Intermission. Fusing staunch activism with acutely personal views, Palmer has said the album’s songs are “exercises in survival . . . The kind of stories I’m sharing on this record – abortion, miscarriage, cancer, grief, the darker sides of parenthood – have been therapeutic and frightening to write.” No doubt, but Palmer has a leavening sense of performance humour that is bound to strike an interesting, involving balance. TCL

WESTIVAL
Westport, Co Mayo Until Monday 28
Honing in on the wildness and the creativity of the west coast, Westival has a programme full of workshops, music, theatre, literary, visual arts and family events for the bank holiday weekend. Not only can you catch Le Boom, the Hypnotic Brass Ensemble, Paul Noonan, Maria Kelly and the Mary Wallopers, that’s rap act TPM’s trad band, in action, you can also get spooky at the Halloween Ball, featuring Zaska, TPM and Glamo, or watch Dracula (1931) with a live score in the Town Hall Theatre. LB

LETHAL DIALECT
Whelan’s, Dublin
Alternating between his birth name of Paul Alwright and the Lethal Dialect moniker, this Dublin hip-hop artist veers towards the full band experience rather than the MC categorisation, and in doing so benefits from a broader reach and acceptance. Not that Alwright’s delivery of impassioned and insightful lyrics is any the less impactful. After last year’s Hungry (released under his own name), he is back performing and recording under the LD title, working on a crucial part of what keeps him grounded as a writer/musician: reality spliced with a little bit of mischief. TCL

WILD YOUTH
Cyprus Avenue, Cork; Also Saturday 26, Wexford Spiegeltent Festival, Wexford
The last 12 months have seen Irish band Wild Youth go from playing small shows to headlining the Olympia Theatre and playing to stadium audiences, courtesy of a support slot with Westlife in Croke Park this summer. Managing to find that sweet spot between guitar rock and chart pop,  their 2019 EP The Last Goodbye is filled with bops and earworms like Can’t Move On, a song that will win you over and wear you out in no time. LB

INDIGO GIRLS
Liberty Hall, Dublin; also Friday 25, same venue; Saturday 26, Knocknarea Arena, Sligo
Almost 35 years after they met in Laurel Ridge Elementary School, in DeKalb County, Georgia, Amy Ray and Emily Saliers continue not only with their robust indie folk/pop music but also with their quite visible activism for LGBT rights, climate change and Native Americans. This year, Indigo Girls won the Pell Award for Lifetime Achievement in the Arts, an award Ray and Saliers could surely only have dreamt about when they first began. Special guest is Lucy Wainwright Roche for all three shows. Both of the Dublin gigs are sold out. The Sligo show is as part of Sligo Live. TCL

BIIG PIIG
Whelan’s, Dublin
Jess Smyth is one of the most interesting female names currently operating in that vague (and, to some, redundant) area commonly known as urban music. It’s pop music, captain, and very much as we know it. Fusing neo-soul elements with a trippy type of hip-hop is Smyth’s game. The London-based Irish songwriter/singer doesn’t perform in Ireland too often, so now’s your chance. Expect to hear tunes already out there and new ones Smyth is cooking up for serving on either an EP or an album next year. TCL

JAYDA G
Button Factory, Dublin
One of the highlights at this summer’s All Together Now, Jayda G is very kindly making her way back to Ireland for those who were too distracted at the Waterford festival. The Berlin-based Canadian is gunning for the title of the queen of new disco, and her 2019 album, Significant Changes, is loaded with enough bangers to make that happen. When she performs, her enthusiasm is magnetic so if you need a Friday pick-me-up, she will lift you up and send you spinning. LB

DARK ARTS FESTIVAL
Smock Alley Theatre, Dublin Until Sunday 27
Making its debut this October, the Dark Arts Festival is a chance for fans of  avant-garde electronic music and visual art to experience some of the most renowned and underground performers and artists from Berlin, Copenhagen, Dublin and Toulouse. With 15 acts booked in, including De Sang Friod, Black Merlin, Le Syndicat Electronique and Katie Geraldine O’Neill, this festival is a one-stop shop for the best in dark arts. Weekend passes and tickets for the opening show are available to buy now. LB

THE FINAL ALL CITY JAM
The Bernard Shaw, Dublin
It’s the final week of the Bernard Shaw holding the fort on the south side of Dublin and we’re almost onto the last of the goodbyes. October has seen DJ sets and performances from artists who helped make the Shaw what it was, and it’s fitting that All City get an entire day to bow out. From 11am, you can catch Long Island Sound, R Kitt, EMA, Caít, Duffi, DJ Paddy, Rosita Moulin, Squig and many, many others. It’s gonna be emotional . . . LB