‘Enya is up there with the Beatles’

Natalie Mering, who performs as Weyes Blood, on climate change, Greta Thunberg and Enya’s influence on her music 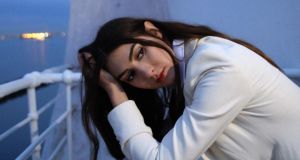 It all started with Leonardo DiCaprio freezing to death in Kate Winslet’s embrace. The climactic scene from Titanic obviously didn’t chill Natalie Mering as irreversibly as it did Leo’s character. But it left a mark nonetheless. As did the 1998 blockbuster’s message that nature, in all its roiling, storm-tossed glory, is not to be taken lightly. Laugh in its face and it will have the final, fatal chuckle.

“The James Cameron movie had a huge impact,” says Mering, who performs hurricane-wracked confessional pop as Weyes Blood and brings her new tour to Dublin on October 26th. “The Titanic is one of the best historical examples of the hubris of man against nature.”

People would rather not get involved. It’s our job as artists to draw the line between climate justice and social justice

She’s one of a number of musicians to lately repurpose their art as a red alert regarding the dangers of global warming. Ezra Furman told The Irish Times recently that he’d wished he’d called his new LP Climate Change. Billie Eilish’s current single, All The Good Girls Go to Hell, essentially invents Extinction Rebellion pop (“hills burn in California/ my turn to ignore ya”). Anohni – formerly Antony and the Johnsons – has campaigned tirelessly on the subject. This is now a genre, however reductive that may sound.

“Climate change is existential and people can’t yet see how it relates to social justice,” says Mering whose latest album, Titanic Rising, channels her fears for the planet’s future and her frustration over the widespread indifference to perhaps the most existential danger humanity has faced since the threat of nuclear war. “People would rather not get involved. It’s our job as artists to draw the line between climate justice and social justice.”

Mering received an insight into how intimidating the forces massed against environmental campaigners truly are when activist Greta Thunberg sailed to America by carbon-neutral boat in August. The vitriol directed at the 16 year-old on social media and elsewhere shocked the singer. It was a case of ignore the warning, eviscerate the messenger.

“People are really angry. What happens in America is that people react out of a place of fear. They feel humiliated that this 16 year-old girl, this prodigal child, has to be the canary in the coal mine. They’re saying, ‘why would you believe a 16 year old – she doesn’t know anything’.The right and the alt right are chock full of emotions. You’re not going to get any kind of discourse.”

Creative types can be dismissive of the approximately 50 per cent of Americans who voted Trump. However that, in some ways, is the America that produced Mering (31). Her parents raised her as an evangelical Christian in suburban Doylestown, Pennsylvania. Doylestown went for Hilary Clinton in the 2016 election but only just (48.4 per cent to 47.8 for Trump).

“I can totally get in their heads,” she says. “A lot of people are single-issue voters. They will take an issue like abortion or gay marriage… things that are related to religion and it will become the most important issue for them. They will vote entirely based on that.”

They also have a deep seated distrust of experts. “An environmentalist rolls up to this guy who is hunting and says, ‘you can’t do that…you’ll kill the birds’. His response is, ‘I’ve been in the woods my whole life – you can’t tell me.’ There’s actually a lot of people involved in nature who won’t believe in climate change because of the mouths that are speaking about it. They have their own belief system. It’s almost as if it’s not about truth or science. It’s about emotions and a sense of loyalty. I’ve personally talked to people from rural areas who don’t believe in climate change.”

A bit like Brexit then? “There’s this weird last gasp of the baby boomers, who might remember when the world was a simpler place,” says Mering. “There’s this strange nostalgia. The idea that we can reverse engineer our country or our world. We really can’t.”

She isn’t sure how much headway she is making putting herself out there. Climate change is one of the themes of Titanic Rising. The record, her fourth as Weyes Blood, is by a significant measure the most acclaimed in a career that started with her playing in psychedelic drone group Jackie-O Motherfucker.

Yet whenever she addresses the subject directly on social media the reaction runs from indifference to hostility. The loudest response is from trolls. Otherwise, it’s just a huge virtual shrug.

“There is somewhat of a distaste among millennials for mobilising,” she says. “It’s no coincidence that the people protesting the most are children and teenagers. They haven’t had to go out into the world and make a living yet. In that state of idealism they believe things. Millennials are so burnt out and so disenchanted: it’s hard for people to believe they can make a change. It’s for artists to carve the pathways. I’ve tried a little.”

There is a proud tradition of musicians turning to songwriting to exorcise the demonic legacy of a strict religious upbringing. It’s a club that includes everyone from Sinéad O’Connor to Father John Misty. Mering has a happier story. True, she named her project after Flannery O’Connor’s anti-religious 1952 novel Wise Blood. Yet she insists a Christian childhood hasn’t damaged her for life. Her parents were devout – but also former hippies. She took as much from that phase of their lives as from their later embrace of Pentecostal dogma.

“There were definitely limitations on what I was allowed watch,” she says. “It wasn’t super “legalistic”. That’s the phrase my parents would use to disassociate themselves from the Christians who were “legalistic” [i.e. stricter]. It was more esoteric than the typical Christianity. I still had to eat with my share of guilt and condemnation and all that stuff.”

Enya is definitely underrated because she is so feminine. She is a completely uninhibited feminine force. A matriarchal force in music

She’s a Democrat and anxious about the race to secure the Presidential nomination and take on Trump. In a perfect world she would like to see Elizabeth Warren, the former law professor from Massachusetts, win the nomination. But would a left-leaning academic trump Trump?

“I like her. She and Bernie [Sanders] would be a great [ticket]. But I’m not a political strategist. I don’t know if they would be the best bet. Some people might scream “socialism”. That’s a dirty word in America.”

Titanic Rising brims with torch songs, laments and dirges that glimmer like the morning frost. Kate Bush is an influence as is Karen Carpenter (or at least Sonic Youth’s hip, revisionist idea of Karen Carpenter). Listen without prejudice and you may also glean echoes of Enya – cited by Weyes as one of her musical heroes. I ask if she is being tongue in cheek name-dropping the first lady of Celtic prog-pop.

“She’s incredible,” says Mering. “Enya is definitely underrated because she is so feminine. She is a completely uninhibited feminine force. A matriarchal force in music. She had so much success because of that distinctive sound. But because music people are obsessed with rock ’n roll and drums, she doesn’t get the attention she deserves. If you look at her record sales, she is, in my opinion, up there with the Beatles.”