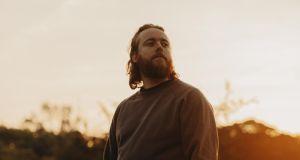 Nealo: ‘I always felt that something huge was happening somewhere else and I wanted to be there.’ Photograph: George Voronov

The weather gods are being kind today. Dublin’s Botanic Gardens are in full bloom, the sun is sending warmth our way, and Dublin hip-hop songwriter Nealo (aka Neal Keating) is failing miserably at hiding the tendrils of many tattoos peeping out from the arms and the neck of his top.

Soft-spoken, articulate, contemplative, authentic, good company – you may as well be describing the hip-hop songs he writes as much as the person.

“It was instinct more than anything else,” says the 35-year-old of the first time he left his home in Clonsilla, west Dublin. “I always felt that something huge was happening somewhere else and I wanted to be there.”

There wasn’t a lot going on for a teenager, he continues. Punk and metal music – the likes of hardcore bands such as Minor Threat, Black Flag, Madball – is what he was into back then, “and a lot of it was coming from Canada and America. I just felt a calling to leave, and when I was 18, I went on a J1 to San Francisco.”

He was back home after six weeks. “I couldn’t get a job – or I didn’t try hard enough. I was probably drinking a lot, generally messing around.”

Drifting for the best part of two years between playing with metal bands at night and menial work during the day – “I worked in an insurance company and I hated that; I felt so caged” – Nealo was 20 when, with a Canadian metal act he had befriended during some of their Irish gigs, he moved to Vancouver. He lived there for a year, returning home only because his visa had expired.

Initially anxious of the obligations of independent living in a new city, he quickly adjusted. His first job was a 17-hour shift shovelling snow in sub-zero temperatures. Work like that was, he recalls, beneficial to him. For a while at least, he had found his tribe, “people who back then seemed so much cooler than anyone I had previously met”. He hooked up with the hardcore band Ruiner and toured with them as their merch seller. And then? Back to Ireland.

Within hip-hop, Nealo veered towards the style that best suited his personality – slender soul, laid back jazz, hushed beats

Nealo’s experiences in Vancouver had been life-affirming. As soon as he walked through the arrivals hall at Dublin Airport he went not home to Clonsilla but to a practice room to rehearse with his new hardcore band, Frustration. “Always looking for something else rather than what you have” is how he describes his need for change without fully thinking it through.

“Back then,” he says with the perspective of experience, “it was as simple as getting in the van and going on tour, trying to get popular and having fun.” He pauses to take a sip of coffee. “But I didn’t really know what I was doing.”

While engaging with the hardcore-loving communities through touring and gigging generated random moments of bliss, Nealo sensed something was missing. “If I’m to be honest, I felt like a bit of a waster.” His father, he recalls, gave him an inspirational kick up the backside.

“He said if I could win the Lotto but that it would take me 10 years to win it, would I do it. I said, yes, of course I would. So I studied law. I got my degree and my master’s, started working in a firm, but I just didn’t like it. I was good at it, I reckon, yet – and here’s the pattern again – I felt that things were happening but I wasn’t there for them. People were playing festivals and moves were being made in music, but I wasn’t playing music at all.”

Around the same time, in order to help pay for his mature studies, Nealo started a dog-walking business. “And then, in 2018, I had the accident with my hand.”

We won’t go into that in too much detail, except to say that while recuperating in hospital with a bandaged right hand hanging in there with almost 60 stitches, two fractures and a severely bitten tendon, he felt that he was “back at square one” albeit with a difference: he decided to once again submerge himself in music.

Altering his music style from hardcore to hip-hop is, he agrees, quite a radical change, but if there was an epiphany while waiting for his hand to heal it materialised, like painkillers, in woozy slow motion.

Within hip-hop, of which he has long been a fan, Nealo veered towards the style that best suited his personality – slender soul, laidback jazz, hushed beats. And the narratives that would form the spine of the songs? As he approached his mid-30s, he knew he’d have more than enough to write about.

His forthcoming debut album, All the Leaves Are Falling, is full of the right stuff – no braggart collection of songs from an egotist, but rather trustworthy stories of youthful mistakes, exodus, drugs, love, death, mental health issues, and parental responsibilities.

The album arrives towards the end of an unprecedented year, and as much as Nealo understates –“Covid-19 has obviously put a bit of a spoke in the works” – he also rationally looks at the positives.

“I’m trying the best I can to look at this year as a lesson in how to change my expectations and start living more in the present. This is what the pandemic has forced us to do, so if I keep thinking about missing out on this, this and this, it becomes a downward spiral.”

He wouldn’t like people to think he’s being preachy. Like too many others, he has suffered from the peripheral rollercoaster effects of Covid-19 over the past nine months. “I’m resigned to the fact I can’t change what’s happening, so I’ve decided to change the way I think about it.”

Such an approach rests easily on his tattooed shoulders. His age, he agrees, gives him firmer experiential benefits over younger Irish rappers, but he’s also aware that they “have more energy and an advantage in being aware of what’s going on in current music, which makes it easier to catch a wave. But, yes, being older gives you a lot of stuff to pull from, stuff that I wouldn’t have had 10 years ago. I wouldn’t be the same writer than I am now, and I’m a better one now than I once was.”

Another benefit is the diminishing of ego. This is a key factor in Nealo’s considered music, which best serves the listener and not the performer of it. Who else to blame for that but his toddler son, Jacob?

“I’m not as important as my brain thinks I am,” allows Nealo, with a smile almost as bright as the sun, “but I’m important to this guy, and it’s important for me to be there for him. There’s a sense of belonging that being a father gives you, and that’s what I was probably missing at times when I moved away from Ireland. You feel that this guy really needs me and that this is where I belong. And so you want to make this happen above all other things.

“It felt that I didn’t belong anywhere except within that community, at the gigs, with the people. I never really felt that I fitted in with any particular set of people, but when I discovered the music it really spoke to me in a way that made me feel I had found a home. All the friends I made at that time are still my friends. I met my wife at that time, too. Hardcore has a unity vibe going through the music and the sense that we’re all in it together. Everybody helps each other and the live shows are insane. Once you’re in it, you’re so into it.

“Us against the world? Even though it is a little bit cliched, I love that idea. Also, I think it’s fine to associate with one particular group and have the mentality that not everyone is like us, especially so when you’re young because that’s all you want.”

All the Leaves Are Falling is released on October 30th. Socially distanced seated all-shows at the Workman’s Club, Dublin, November 5th/6th (two shows each night, 7pm/9pm) are sold out