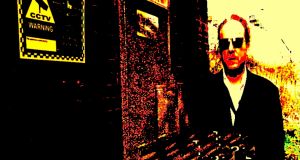 Richard H Kirk: “It would be an insult to the spirit of the original Cabaret Voltaire, I think, to go for the quick buck.”

Britain was burning as Cabaret Voltaire put the finishing touches to their landmark Red Mecca album in the summer of 1981.

“It was made against a backdrop of civil unrest,” says band founder Richard H Kirk of the riots that swept the UK four decades ago engulfing everywhere from Brixton to Birmingham. “People were going out and having to fight back against the coppers who were brutalising a lot of the black community.”

Cabaret Voltaire have broken a 26-year silence with the release of an LP that  arrives in circumstances similar to those in which Red Mecca was created. Brexit, the collapse of the Labour Party’s “red wall’ in the north of England, Donald Trump, coronavirus. . . All of it bubbles up between the cracks of Shadow of Fear, a suite of nightmarish electronica that hits like a gut-punch. The title alone perfectly sums up the past 12 months.

“Sheffield narrowly voted for Brexit, which is a shame,” says Kirk, speaking from the South Yorkshire metropolis where he has lived all his life. “I can’t see what the good is. How’s it going to help us? I can imagine food and medicine shortages. There is a kind of an embarrassment about Boris Johnson. He was relying on Trump to give him his chlorinated chicken and all that s**t. Joe Biden is totally not into that.”

Cabaret Voltaire are one of the most important British groups of the past 50 years. They didn’t sell many records – but what truly influential band ever does? They did, however, help forge the future of electronic and industrial music. Kirk himself has described them as the “Velvet Underground of electronica”.

“Cabaret Voltaire were way, way ahead of their time,” is how DJ Magazine summed up their legacy in 2013. “Creating a challenging sound that soaked up electronics, dub, found sounds and scuzzy punk, their sonics were hugely influential on the creation of industrial, house and techno.”

They took their name from the Zurich nightclub that was the birthplace of the Dadaist movement during the first World War. Against a background of mechanised slaughter, Dadaism celebrated “nonsense, irrationality and anti-bourgeois protest”. Cabaret Voltaire’s music – simultaneously brutalist and beautiful – was powered by the same philosophy. It was, and still is, often absurd and ominous in the one heartbeat.

It was almost too perfect that Kirk and bandmates Stephen Mallinder and Chris Watson came from Sheffield, the thundering heart of Britain’s steel industry. Early albums such as Mix-Up, Three Mantras and the aforementioned Red Mecca indeed have a clanking, shuddering majesty as if assembled on a production line. They are also steeped in the underdog spirit of the city.

“One of the first British cities to become industrialised, Sheffield rapidly acquired a proletariat in the classic Marxist sense: human beings reduced to appendages of flesh attached to machinery acutely conscious of both their exploitation and their common interest in struggling for better conditions,” wrote Simon Reynolds of Cabaret Voltaire’s origins in his definitive punk history, Rip It Up and Start Again.

“Sheffield has long been a Labour or socialist stronghold,’ agrees Kirk, who as a child attended Young Communist League meetings with his father. “Which is maybe reflected in what Cabaret Voltaire did over the years. They used to fly the red flag over the town hall in the 1980s. There was a really strong resistance against Thatcher. It’s always been anti-Tory.”

Cabaret Voltaire didn’t even see themselves as a band in the traditional sense when starting out. Kirk’s first instrument was a clarinet put through an amplifier to create haunting and terrifying distortion.

Mallinder and Watson, meanwhile, drew on the musique concrète tradition whereby recorded sounds are used as raw materials to be manipulated and distorted. Rhythm and melody were not a priority. You couldn’t sing along to their music. You could barely dance to it.

The onslaught didn’t always go down well. Touring with Joy Division across England in 1978 they were routinely pelted with objects. On one occasion Mallinder had to be rushed to hospital after he was struck on the mouth with a missile and nearly lost several teeth.

Cabaret Voltaire’s aggressive and uncompromising outlook was typical of a Sheffield scene which, through the 1970s, was drawn to experimental music even as the rest of the UK became obsessed with punk.

Kirk’s kindred spirits were Phil Oakey and his fellow Sheffield outsiders in the Human League. Oakey and company were initially just as avant-garde as Kirk and his crew. That would change of course; by 1981 the League were slapping on mascara and glamming it up on Top of the Pops.

Cabaret Voltaire skipped the mascara but attempted to chart a similar route to the mainstream. When Watson left following Red Mecca, they signed to Virgin and clocked up big MTV hits such as Sensoria and I Want You – the latter a funk odyssey accompanied by a video in which an actor dressed as Count Dracula body-pops in a public loo. It was memorable, if a long way from musique concrète and neo-Dadaism.

“After Chris Watson left we carried on in a totally different direction,” nods Kirk. “A lot of people said it was rubbish. Fortunately, I think it has stood the test of time.”

Cabaret Voltaire drifted apart in the 1990s. Kirk, though, continued to release industrial and house bangers for a variety of labels and under a baffling panoply of stage names: Sandoz, Sweet Exorcist and Dark Magus – the latter coincidentally also the name of my first Dungeon and Dragons character.

Kirk decided to revive Cabaret Voltaire five years ago, this time as a solo project. There was just one rule. He would only perform new material. And so began the long journey to Shadow of Fear.

Kirk is wary of the Mojo magazine effect whereby musicians are celebrated for historical endeavours rather than for what they are doing today. This is understandable as he’s been lionised on many occasions: in Rip It Up and Start Again and in the 2009 BBC documentary Synth Britannia, for instance. The time has come to push on.

“It’s 2020,” he says. “You can’t live in the past. Well, some people obviously can. I don’t want to join them. That thing of doing a classic album all the way through? I don’t get that at all.”

Does he ever have awkward conversations with his old friend Phil Oakey and the rest of the Human League? After all, they dwell, almost exclusively, on Planet Nostalgia nowadays.

This refusal has a price, he acknowledges. A few years ago the organisers of Coachella offered “a very f**king large amount of money” for Kirk to put back together the original Cabaret Voltaire line-up. He turned them down on the spot.

“Financially, yeah, it would be the accountant’s choice to do the old material. I’ve never been motivated by money. It would be an insult to the spirit of the original Cabaret Voltaire, I think, to go for the quick buck. There are plenty of live albums if people want to revisit the old days. I can’t bring that. I don’t want to bring that. I’d feel like a permanent relic.”

Shadow of Fear is out now on Mute