Joan Armatrading: ‘I’ve had people say I’m too black, or not black enough’ 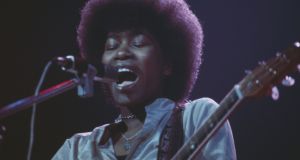 ‘It’s very nice to be honoured,” says Joan Armatrading, down the phone from her home in Surrey. The 69-year-old is talking about receiving this year’s Women of the Year lifetime achievement award in the UK, which sees her honoured alongside the likes of child burns survivor Sylvia Mac and Adwoa Dickson, who set up a community choir for young women who survived trafficking. “Whether I measure up is another question.”

She’s joking, of course, but what does the continued existence of the award tell us about where the struggle for equality is in 2020? “It’s maybe not as relevant as it was in 1955,” she says, “when Tony Lothian set it up after being denied admission to a men-only meeting. But women are still doing incredible things in this society, so reward them.”

It’s hard, though, to think of anyone more deserving. The three-times-Grammy, twice-Brit-awards nominee has made 19 albums, with 2018’s Not Too Far Away returning her to the charts, and she remains a global inspiration. Biographies call her “the first black British female singer-songwriter to achieve international success”, but she’d like to correct this.

“I’m actually the first woman, not just the first black woman,” she says, her cheery, chatty Brummie tone taking on a hint of steel. “It’s important because ‘black’ implies someone did it before me. Of course, there had been very successful female artists, but they didn’t write their songs.” Which she did, aged 14, “when there weren’t any role models for me. People ask, ‘Weren’t you influenced by Joni Mitchell?’ But when I started writing, there was no Joni Mitchell. That is, she hadn’t started making records.”

The former office worker at the Rabone Chesterman factory didn’t feel like a pioneer back then though. When Armatrading made her first record in 1972, someone told her: “In five years, your career will be over.” She says: “But back then, nobody thought people would be talking about the Beatles in 200 years, like they do with Bach or Beethoven. I don’t know if they’ll be talking about me.” She’s laughing. “I like to think they will.”

Armatrading was doing extraordinary things from the beginning. The daughter of a carpenter and a housewife who emigrated to Birmingham, she flew to join them four years later when she was seven, taking the flight from the Caribbean alone. “The 1950s were more innocent times,” explains the singer, who also took the bus from Birmingham airport to the city centre by herself – at an age when most of us weren’t allowed to walk to school unaccompanied. “It didn’t feel weird to me. I was excited to see my mum.”

I got to sing and play the guitar. It was wild. But I didn’t take my clothes off

One day, her mother bought a piano as a piece of furniture. “I started writing songs,” she says, “and that was it, really.” Her chief inspiration was, and still is, human behaviour. “I’ve always been an observer. I was fascinated by how kids played at school. There were groups and cliques, and if there was any trouble everyone would gather round. I’ve always been fascinated by watching how people treat each other and the communication between them.”

There were fewer platforms for a black female singer-songwriter back then. An early break – in a 1970 touring production of hippy rock musical Hair – came about by accident. She’d met two friends who were going to the audition, tagged along and auditioned as well. “I didn’t know what I was getting into,” she laughs, referring to the show’s profanity, drug-taking, radical politics, bisexuality and nudity. “But I loved it. I got to sing and play the guitar. It was wild.” More laughter. “But I didn’t take my clothes off.”

She’s eternally grateful to the BBC DJs – John Peel, “Whispering” Bob Harris and Johnnie Walker – who heard something in her crafted, determined songs and helped propel her to national attention. In 1974, she appeared on the cover of iconic women’s lib magazine Spare Rib and declared: “Black women don’t sing pretty, because they haven’t been brainwashed into being weak. They have to be strong and just get on with it.” She hoots at being reminded of her youthful fire, but hasn’t changed her view. “Would you say Beyoncé sang pretty? I wouldn’t. No, there’s always a kind of strength.”

Was it hard making it in such a male-dominated industry? “I didn’t feel I had a struggle as such. Maybe I did, but I didn’t notice it.” She suspects it would have been harder if she’d needed someone else to write her songs. Pam Nestor, who she’d met in Hair, wrote words for her 1972 debut album, Whatever’s For Us, a beautifully dreamy but stirring collection of largely piano-led, lushly produced songs. “But even when I met Pam, I was already writing music and lyrics.”

She credits Gus Dudgeon and Glyn Johns (“two of the best producers ever”) for enabling her to achieve the sounds she wanted. “They didn’t do The Big I Am – ‘You think you know but I know better.’” Did others? She hoots again. “They tried!”

Armatrading initially played all the instruments on 1981’s Walk Under Ladders herself, but eventually relented, hiring musicians. However, after starting to self-produce and engineer, she set up Bumpkin, her own studio. The result is that she has played most, and often all, of the instruments on each of her albums since 2003’s Lovers Speak. Her achievements are made all the more impressive by the fact that she’s made blues albums, jazz albums and even – with 1983’s The Key, which includes Drop the Pilot – a hard rock album. “I love hard rock!” she explodes. “I always tell myself, ‘One day I’ll make a heavy metal album.’ With lots of guitar shredding! And I will.”

Hits such as Love and Affection and Me Myself I made her a household name, but other songs have become cultural landmarks. She reveals that the shocking imagery in How Cruel, her 1979 Grammy-nominated song about racism, is real. “The neighbours didn’t move out because we moved into a house,” she says. “But I know of that happening. My dog was stolen, though, and I have had people say, ‘She’s too black’ or ‘She’s not black enough.’”

Similarly, Barefoot and Pregnant, now a feminist anthem, was inspired by a friend-of-a-friend who was caught in an abusive, controlling relationship. And in Rosie, also from 1979, Armatrading sings about a transgender character with sensitivity and concern. A taxi driver, she recalls, was showing her New York: “And walking up 42nd Street were all these Rosies with high heels and lipstick and the whole get-up. I’d never seen that before.” Nowadays, the song is a live favourite and the word “trans” almost mainstream. “Have I helped that process? I just wrote a song, but that’s how it works. When George Orwell wrote 1984, do you think he seriously thought all those things would happen?”

As for Taking My Baby Up Town, about a couple who are shouted at in the street but keep walking arm in arm, the song has become a gay pride anthem. But Armatrading is keen to qualify its success: “My songs are for everybody: black, white, male, female, gay, straight, bi. They’re about people. We’re not here to gaze at pretty trees or nice buildings.”

The year 2020 makes me think of the Industrial Revolution

Armatrading guards her own private life ferociously. In 2011, she entered a civil partnership with the artist Maggie Butler at a ceremony in the Shetland Islands, which is about 100 miles off the already remote northern tip of Scotland. Someone saw the statutory public notice, informed the local paper and thus the world, triggering many “love and affection” headlines. Is it harder to keep anything private now?

“I try my best,” she laughs. “Everybody needs something for themself.” She refuses to correct internet rumours because “if you do one, you’re in that game”. In 2005, as Women of the Year president herself, she gave the award to Margaret Thatcher – “because whatever people say about her, she was the first woman prime minister”. But, she says, people shouldn’t assume, as they do, that she votes Tory. “No matter what you read, it’s never come from me.”

She’s forever seeking new challenges. At the age of 57, she ran the New York marathon. “I felt like Superman,” she says, then corrects herself. “Superwoman! Although running down hills, I was more gangly, like Phoebe and Rachel running in Friends.”

Despite her phenomenal musical success, Armatrading says her proudest achievement is her BA in History from the Open University, which she studied for while touring. “Wherever I was in the world – Australia, Canada or wherever – I had to post in my essays. Now they let you do it online.” She’d yearned to study since she’d started work at 15, and the subject still interests her. “The year 2020 makes me think of the Industrial Revolution,” she says. “We’ve had climate change, droughts, floods, Brexit, Trump and the pandemic. We’ll never go back to what we were. It’s a defining period.”

And she has spent it writing songs during lockdown. Next year’s new album will be her 20th. Apart from the heavy metal opus, is there anything left to do? “Oh loads,” she laughs. “But I never say, ‘I’m going to do this.’ When I’ve done it, I’ll tell you.”–Guardian