Niall Horan plays a sort-of gig for a kind-of audience. It’s a bit of a triumph

It’s not like being in the Royal Albert Hall. But, for now, it’s as close as any of us can get 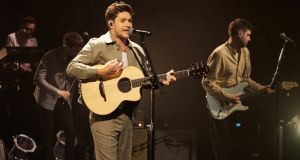 It is, of course, strange watching Niall Horan sing to a mostly empty room. So it’s comforting to know that it feels that way for Horan too. “I really do wish you were here,” he says one third of the way through this enjoyably exuberant and heartfelt 60-minute concert from the Royal Albert Hall in London. “I’ve had a nerve-wracking start.”

With live music in suspended animation due to coronavirus – former U2 manager Paul McGuinness fears touring will “never be the same again” – streaming for now represents the future of the industry.

Obviously, it’s nothing like the real thing. There is no sweat, no spilled drinks, no breathless bawling along from the cheap seats (if you belt out the lyrics to This Town in your empty living room has it even happened?).

The experience is a peculiar one. You’re not attending a gig. And yet, you’re not quite not-attending a gig either. There is an uncanny valley aspect that is hard to get your head around.

Horan, though, is good value. Some 120,000 punters in more than 100 countries have forked out the equivalent of $20 to watch the 27-year-old Mullingar star perform material from his two studio records.

That might seem steep-ish 60 minutes of “content” beamed to your laptop via YouTube. Still, it’s less than the $30 Billie Eilish charged for her livestream show the week previously. And it is for a worthy cause with funds raised going to Horan’s crew – out of work since the pandemic started – and the #WeNeedCrew initiative.

He puts in a solid shift, too. Epic, indulgent, moderately terrifying – and those are just the brightly-patterned pants he arrives on stage wearing.

The music is every bit as glittering a mishmash as his trousers. Much like his old One Direction pal Harry Styles, Horan has a mildly shocking penchant for late 1970s soft rock. And that shines through on the rollicking Small Talk and Nice To Meet Ya, the latter showcasing the guitar chops of Dubliner Jake Curran (and co-written by another Dubliner, Ruth-Anne Cunningham).

As you’d expect of an X-Factor graduate, Horan is an accomplished balladeer. This he proves on closing number Flicker – the big-hearted weepy which, were it the “old normal”, would have the audience waving cameras over their heads. He also dives into Slow Hands, which, crushingly, isn’t a cover of the Joy Division-esque 2004 hit by Interpol.

With a running time of just an hour and Horan and band observing social distancing there isn’t much room for improvisation. But he does squeeze one surprise with a cameo by American singer Ashlyn Rae Willson, aka Ashe.

She flew across the Atlantic and quarantined for two weeks to duet with Horan on her hit Moral of The Story. It sounds more than a little like Billie Eilish – no surprise considering Ashe co-wrote it with Eillish’s producer (and brother) Finneas O’Connell.

The bubblegum dirge is among the highlights of the evening and Horan generously shares the limelight with his guest. However, for diehards the most memorable moment probably comes immediately afterwards as he reaches for Black and White, his inescapable mid-tempo smash from earlier in the year.

The song is slick, slightly generic and a platform for Horan’s mellow, rasping vocals. He closes his eyes during the chorus and director Paul Dugdale (who oversaw Taylor Swift’s Netflix Reputation concert film) cuts to an overhead shot of the vast and empty venue.

It’s nothing like being there. But, for now, it’s as close as any of us is going to get. By those, admittedly very odd standards, the evening is a bit of a triumph.