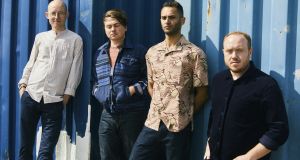 Any band that gets back together after a few years pursuing those sometimes dreaded “solo” projects will often return to face one of two things: a shrug of indifference from a fan base that has long since moved on or a thousand welcomes from a fan base that has spent the same few years waiting patiently for the about-turn. In the case of London band Bombay Bicycle Club, it seems the fans just couldn’t stay away – the comeback tour has been greeted with a thumbs-up.

Of course, 15 years ago no one knew much about Bombay Bicycle Club – they were no more than a bunch of teenagers eager to play gigs. There was a modicum of hereditary musical talent in the mix, however: Suren de Saram’s father is the acclaimed Sri Lankan cellist Rohan de Saram; Jamie MacColl’s father is Neill MacColl (nephew of Kirsty MacColl, and grandson of Peggy Seeger and Ewan MacColl). So there was always going to be a varied songwriting aesthetic, and so it proved from quite early on. The band’s 2007 debut EP, The Boy I Used to Be, was released a few months prior to newspapers such as the London Independent running features on them topped with headlines such as “Too cool for school: the teen band who’ve got the music industry on the run”.

By summer 2008 all group members had finished secondary school and immediately set about touring the UK as well as performing at as many festivals as would have them. They also set about recording their debut album, I Had the Blues but I Shook Them Loose, which was released in summer 2009 on Island Records, to which they had recently signed. The album quickly pitched them as a band to watch, with music writer Laura Snapes calling it in NME “the most poignant anthology of what it means to be young and restless in the city since fellow Londoners Bloc Party’s Silent Alarm”.

What followed was the usual trajectory of a group that could do no wrong. Three further albums (2010’s Flaws, 2011’s A Different Kind of Fix, 2014’s So Long, See You Tomorrow) arrived, each one confirming their status as a compelling outfit that knew their way around indie-guitar pop music and its variants. Such eclecticism matched with shrewd music intelligence could have continued for a while longer had not the members announced, four years ago, an indefinite hiatus during which they would pursue various solo and side projects.

As these efforts sometimes go, the sum of the parts constitutes more value than the separate elements, hence the festivities when BBC announced their return to the fray last year. It seems they have struck a chord, too, as their recently released new album, Everything Else has Gone Wrong, is once again picking up the plaudits. Well, mostly – the same Laura Snapes, now writing in The Guardian, recently described the new album as “music for adverts that depict a human life unfolding in 45 seconds as a heart-warming reminder to buy a mid-range European hatchback.”

For all that, the wheels continue to spin, as these sold-out shows confirm.

Liz Nugent: ‘People have accused me of being brave, but what is brave about surviving?’
10