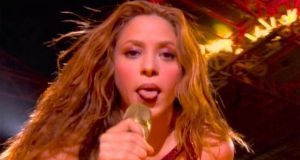 Her hips don’t lie, and apparently neither does her tongue. When Shakira wiggled it and emitted a high-pitched warble during her half-time performance at Super Bowl in Miami on Sunday, the surprising moment instantly launched a thousand memes.

At first the gesture was greeted online with confusion and bad jokes, the casual viewer thinking it was merely a hugely popular performer inexplicably wiggling her tongue and making a funny noise. The casual viewer, as usual, was way off the mark. According to Time, it was “the ultimate power move demonstrating her slayage of the event”.

Performing with Jennifer Lopez, the singer looked directly down a camera as she wiggled her tongue and made the joyful trilling sound, which sounded something like “lololabababa”. Or “lelelelelelele”. Or even “lolololololeeesh”. Depending on who you ask.

Deciding it looked like something a toddler might do for kicks was to miss the deeper significance of the highly memeable and celebratory trill. It turns out the tongue-wiggling combined with high-pitched warbling is an Arabic celebration chant called a zaghrouta. The American Tunisia Association describes it as a “long wavering high-pitched vocal soul representing trills of joy”.

And if you delve a little deeper – thank you, arabamerica.com – you discover that it’s traditionally used “by women in the Middle East and North Africa and is commonly performed in weddings, parties, celebrations and sometimes in funerals to honour someone and to express strong emotions.

“The origin of ‘zaghareet’ or ululation dates back to the pre-Islamic era, as it was a traditional ritual of idolatry practised collectively by women asking the idols for relief, mercy, rain… etc. In addition to drumbeats, they also used ululation to stimulate excitement on battlefields.” So not just a meme but a “teachable moment”.

It was just one moment in an exhilarating performance by the 43-year-old - who was raised in Colombia but who has a Lebanese father – which was culturally significant, especially for fans in the Middle East, for a few other reasons.

As one Twitter user said: “You really have to understand how huge Shakira’s performance was for the Middle Eastern community. She had belly dancing, a mijwiz and a derbeke, performed “Ojos Asi”, which was one of the few Shakira songs to have Arabic in it, did a Zaghrouta, all on the biggest stage.”