The festival’s favoured production style is at the gag-rich, pantomime end of the spectrum 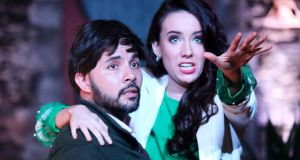 Javier Abreu as Lindoro and Rachel Kelly as Isabella in Rossini’s ‘The Italian Girl in Algiers’. Photograph: Frances Marshall

It’s a while since I heard anyone talk about never wasting a good crisis, although the idea was frequently mentioned when Ireland was in the throes of the Great Recession. Opera promoters in Ireland have, however, been surprisingly alert to the advice.

Opera Ireland became a victim of the Dublin Arts Council’s shilly-shallying over opera in 2010. And in advance of its demise, the company’s artistic director Dieter Kaegi and marketing and communications manager Jennifer O’Connell launched the Lismore Music Festival.

The festival, which was this year renamed the Blackwater Valley Opera Festival, presents opera in a tent in the picturesque setting of the stable yard in Lismore Castle and concerts in and around the town of Lismore in Co Waterford. Hedge-fund manager Michael Alen-Buckley became chairman last year, Gemma Tipton is now festival director, and this year brought an extension in both the number of opera performances and the range of recitals.

The festival is unusual in Ireland for having Mozart (with four productions) and Rossini (with three) as its most-performed composers and for exposure of its atmospheric setting to the weather. The performing area of its marquee is open to the elements, and the Lismore stable yard can honestly be credited with some of the wettest productions ever seen in Ireland.

There has not not been an opera in which anyone dies presented in Lismore since 2011 and its favoured production style is at the gag-rich, pantomime end of the spectrum.   This year’s production of Rossini’s The Italian Girl in Algiers – with much abridged recitative in English and arias in Italian (the festival does not use supertitles) – was typical of the approach.

Director Pierre-Emmanuel Rousseau and designer Slawek Narwid updated the setting from the time of Ottoman rule to a rather dubious international hotel where the guests didn’t get unduly upset by the toting of guns and the bully-boy tactics of its owner, Mustafa. Mustafa’s control of Elvira, the wife he has become bored with was altogether more mild. He just cut up her credit cards.

The comic-book gestures, the eagerness of the chorus to shift into rough and tumble mode, prancing and cavorting to the music, rather wore out their welcome pretty quickly for me, though a goodly proportion of the audience seemed happy to laugh at every twitch and bounce.

The best singing in this tale of a male chauvinist pig who gets his comeuppance from an altogether smarter woman came from the baddie himself, with Leonardo Galeazzi a vocally easygoing and quite stylish Mustafa.

Rachel Kelly’s feisty Isabella made all the right moves and all the right sounds, but for most of the evening came across as vocally underpowered. The resourceful dynamism of her characterisation was not really reflected in her singing until she got fully into her impressive stride in her big number in Act II.

Javier Abreu as her genuine love interest, Lindoro, was at his most appealing when he was not engaged in vocal heroics. His pinched tone under stress limited his success. Rachel Croash as Mustafa’s put-upon wife Elvira, and Sandra Oman as her confidante Zulma, hammed it up for all it was worth. Marco Zambelli’s conducting of the 11-player ensemble did not have quite the pep I’ve heard from him in other years in Lismore.

The festival’s expansion added an extra opera performance this year, and brought the tally of concerts to a total of eight. The most memorable were at Dromore Yard with Franco-Swiss cellist Nadège Rochat and pianist Dearbhla Collins playing two pieces by the long-neglected Ina Boyle (1889-1967), a composer Rochat has already espoused on disc, and whose fortunes took another upward leap recently through the publication of a study of her life and work by Ita Beausang and Séamas de Barra.

Also at Dromore Yard, pianist Adam Heron, winner of the Irish Heritage Bursary 2017, impressed through his musically reserved approach to Chopin and Scriabin. And in a lunchtime concert billed as “guests from the Garsington and Nevill Holt Operas” Tristan Hambleton showed a striking but not always well-controlled bass-baritone voice, while soprano Alison Rose was more vocally polished and musically poised.

Baritone Gavan Ring was on fine form at Salterbridge House in a coupling of song cycles by Beethoven (An die ferne Geliebte) and Schumann (Dichterliebe), though the musical enjoyment of his programme was rather limited by the sheer inaccuracy of his pianist, Denise Crowley.

Pianist Máire Carroll showed her breadth of taste at St Carthage’s Cathedral in an eclectic programme ranging from Bach to Ligeti, Kapustin and Sciarrino, which she delivered in a warm, romanticised way.

The recital programme as a whole, with its concentration on students and emerging artists, was extremely variable and as it stands is undoubtedly in need of some firm quality control.

On the other hand, the venues (Dromore Yard is an impressively restored barn with catering available) are all worth a visit in their own right, though it remains to be seen how affected the music-making will be at Dromore should the heavens open during a concert.

The festival deserves full credit for providing a Steinway concert grand for the events there and the cathedral. If only other regional festivals would be so caring.

Out of the wasteland: the first World War and modernism
8 Welcome to the child sex capital of Europe
9