Nick Cave & the Bad Seeds and Patti Smith at Kilmainham: Everything you need to know 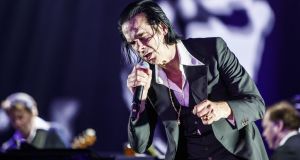 Aside from Nick Cave’s brief appearance last January at Dublin’s National Concert Hall (to celebrate Shane MacGowan’s 60th birthday), this show at the Royal Hospital Kilmainham on Wednesday, June 6th is the first time Cave and his band, the Bad Seeds, have performed in Ireland for five  years.

That’s some time away from a country Cave has professed to admire, but many things have happened to the resolutely maverick songwriter in that period of time, notably, the death of his son, Arthur, in the summer of 2015. Elements of the grieving process were explored on his 2016 album, Skeleton Tree, and the documentary One More Time with Feeling.

Cave’s work is marked by a level of emotional intensity noted for its literacy and compelling investigations of faith, love and death. Easy listening it isn’t, but there’s no one like him, and when he enters that singular zone of communion and engagement with an audience, there are very few to beat him.

One performer/songwriter that can match him, however, is Patti Smith. Now in her early 70s, this powerhouse of a poet and songwriter came to prominence in the mid-1970s and has continued to successfully chart the course between artist and activist.

Like Cave, Smith is a commanding presence noted for her live performances. No “heritage” act, Smith is a valid artist as much off as on stage, and her music retains the authenticity it always had.

The show at the Royal Hospital Kilmainham, Dublin 8 is on Wednesday, June 6th. The night before, Tuesday 5th, Nick Cave will take part in an on-stage conversation at Dublin’s Abbey Theatre under the title of “So, What Do You Want To Know?”

True to Cave’s modus operandi, it will not be the traditional one-to-one public interview, but rather a question-and-answer session between artist and audience.

“The audience tends to ask more challenging, revealing, playful and ultimately serious questions,” he says. “You never know what you are going to get. They can be fearless and they can go deep.”

Like the man himself, then. The Abbey Theatre event is sold out. Doors 7pm.

No. The Kilmainham gig sold out in minutes, and tickets are like gold dust. Ticketmaster is the official ticket seller for this event. All tickets submitted for inspection will be scanned. Anyone presenting a bogus ticket will be refused entry.

On foot: Pedestrian entrances are by East Gate on Military Road and West Gate on James Street.

By Luas: Take the Red Line to Heuston Station, which is a five-minute walk to East Gate entrance on Military Road. (Further info: luas.ie)

By car: There is no parking at the venue, and traffic restrictions will be in place on Military Road and Kilmainham Lane. The nearest car park is Park Rite Parking Lot at 7 Queen Street, Dublin 7.

By car from the West: off N4 towards Heuston Station.

By car from the North: off M1 towards Heuston Station.

By car from the South: off N7 towards Heuston Station.

Mobility-impaired access: Vehicles with a mobility-impaired badge will be permitted to approach the concert from James’s Street and Bow Lane. From here, they will be directed via Military Road to the East Gate, and from there to the Mobility Impaired Car Park. Display of a mobility-impaired parking sticker in a visible position is necessary.

By bus: From the city centre, bus routes 40, 123, and 13 stop beside St James’s Hospital. Bus routes 79/79a bring you as far as Saint John’s Road West, while the 25a stops outside Heuston Station. (Further info: dublinbus.ie)

By train: If you are travelling from outside of Dublin, Heuston Station is a five-minute walk from the Royal Hospital Kilmainham. If you arrive at Connolly Station, take the Red Luas Line and exit at Heuston Station. (Further info: irishrail.ie)

By taxi: The main taxi ranks in the city centre are located on O’Connell Street, and College Green (opposite Bank of Ireland/Trinity College man gate). At Kilmainham, there are taxi ranks outside Heuston Station and Kilmainham Gaol.

If you have to bring along a bag, remember that it needs to be no bigger than A5 size (11.45cm x 15.25cm or 4.5 in x 6.0in), which is approximately paperback book size, enough to carry some money, cards, phone, and essentials such as inhalers, medicine, etc. People without bags will be fast-tracked into the event site. Bags of A5 size and under will be subject to a search. Any article that may be used as a weapon, any person deemed to be offensive or abusive or who may compromise public safety will not be admitted and may be reported to the gardaí.

What can I bring into the venue?

What will the weather be like on the day?

The forecast is for 18-degree early evening, down to a cooler 13-degree by 11pm.

Where can I get the latest event details?