Prelude to a €74m makeover at the National Concert Hall 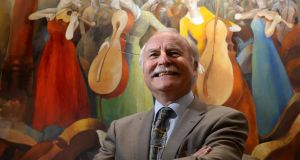 The National Concert Hall’s chief executive, Simon Taylor, makes a good tour guide. At least when the subject is the hall itself and all that lies around it.

We meet in the foyer and he leads me on a tour that begins by exiting under the stairs to the balcony, and brings me back through the downstairs emergency doors in the main auditorium, doors which the hall’s ushers always guard with diligence.

The background to the tour was the Government announcement in April of a €1.2 billion investment in culture, language and heritage. It covers 2018-2027 and is part of Project Ireland 2040.

A total of €460 million is to go to national cultural institutions and the Department of Culture lists €78 million as being earmarked for “National Concert Hall renovation”. The NCH itself does not talk of renovation but rather of “a phased investment to complete a full redevelopment of the existing buildings”.

Taylor explains, “We basically gave the OPW [Office of Public Works] a briefing. What we wanted was a major refurbishment of the hall. It’s 40 years-old. It’s creaking in a lot of places, as you know. The issue with that is once you start to do work, then it escalates. The most pressing thing is probably replacing the seats. Once you replace the seats you get into different fire regulations. Then you’re looking at making the aisles wider. You could go down from around 1,200 to 1,050 seats.”

That, he says, “would be commercially disastrous. So then we looked to see if there was any way the hall could be expanded. The end wall with the organ isn’t actually the original end wall. The hall was extended in the 1890s. If you look at it from the outside, you can see that quite plainly.”

Not only was the original hall shorter, but the stage was towards the front of the building rather than at the back, as it is now. One of the big issues, he says, is that the stage is too small. So the idea is to make it a little wider, a little deeper, and not just retain but expand the capacity, by moving the wall behind the stage as far back as it can physically go within the limitations of the site. The hope is to bring the capacity up to around 1,350.

He reckons that the resultant acoustic issues can be mastered, and it would surely be good, too, if the hall’s current extreme variability of musical experience between different seats could also be remedied.

There were boom-year plans to create a three-auditorium venue at the NCH. Video simulations of the plans of the two finalists in the architectural competition – 3XN and Henning Larsen Architects, both Danish – can still be found online. That development was cancelled during the downturn.

“The challenge for us this time around,” says Taylor, “is that, rather than going to a big architectural competition and then seeing if we could get the funding for it, we took the approach with the OPW that we’ll get the outline plans, sketch in precisely what we’re looking for, and then try and procure the funding before going to the detailed planning phase.”

Whether there will be an open architectural competition or not, he says, will be for the OPW to decide.

The new stage will have a hydraulic lift so a piano can be brought on stage during an orchestral concert without the removal and resetting of chairs and music stands. Ideally he would like “a fully hydraulic stage, with a facility for a pit, meaning that the first four or five rows would also be hydraulic. That would save us an awful lot of time, effort and wear and tear.”

He sums up the auditorium changes: “What we’re looking at is new seating, [a] new bigger stage, reconfigured seating, new air-conditioning. The simplest way for me to think of it is that in 1981 there was a huge amount of compromises made, because there was so little space available overall.”

Most of the site at that time was still in use by UCD. Now it is in the ownership of the State. “We now have the space and we’ve got to look at it in a different way. And therefore, hopefully, put right some or all of those issues.”

It’s clear he does not fully regret that the last big plan was abandoned. A 2,000-plus seat auditorium is not his view of the way forward.

“It’s interesting to me that the London Symphony Orchestra for its new venue in London is looking at around 1,800 seats. To me, if you were to be going from scratch in Dublin, what size would you make a symphony hall? I would suggest something around 1,500 would be your optimum.”

The gain in seats is not a priority for the refurbishment. “I would prefer to get the stage element right, and then address all the other issues, rather than start at the 1,350. And the acoustic design will be critical, to address it as well as we possibly can.”

Beyond the refurbishment of the auditorium, “we wanted an orchestra rehearsal space, we wanted potential for a 500-seat auditorium, we wanted a proper, dedicated education space, increased public spaces, better access to the two staircases at either side, and we wanted the whole of the front terrace back into play – that’s the two floors that are above us and the basement.”

At the moment the plans involve the relocation of the restaurant to the opposite wing, the creation of a new Wintergarden cafe in what’s currently a first-floor open-air space behind the Kevin Barry Recital Room, and the creation of a dedicated orchestra rehearsal space in what was UCD’s medical library.

Front of house, of course, is only part of the story for any performance venue. The NCH’s backstage facilities are notoriously limited, and improving them is an important aspect of the development for musicians who work there.

The main auditorium’s emergency exit doors lead into a building that dates from the Great Exhibition of 1865. It’s a beautiful space in decrepit condition and has obvious potential beyond its intended role in improving the backstage facilities.

Taylor has obviously invested a lot of time thinking about the possibilities of the site. He shows me the aerial image and points to the roof of the main auditorium. “What always strikes me when you look at that,” he says, “is that what seems like a very big building actually looks quite small in the context of the overall site.”

He’s absolutely right. He takes me out back to show where the new, 500-seat recital space is planned. It will require the demolition of some 19th-century buildings – the ones you can see past the security barrier at the back entrance to the hall.

There’s almost an aspect of child in a toy shop as he talks me through the possibilities, and introduces me to any number of enticing, if down at heel, spaces and rooms that have as yet no designated future role. I assume his free-thinking imagination will find itself reined in as details firm up, plans lead to building work, and immediate challenges take over from free-form envisioning of the future.

One of the biggest issues is that the hall will have to close. His hope is that it will close at the end of May 2021 and reopen just over two years later in September 2023. It’s a timescale he describes as “probably optimistic”, adding that it will all come down to the extent of the unforeseen issues that come up. There’s no way of knowing what the archaeologists will discover.

His goal is to keep NCH activity going, ideally in a temporary off-site space. To me, the obvious place would be The Helix in Dublin City University, a comparable-sized hall with a better acoustic and, crucially, currently a lot of dark nights in its Mahony Hall. I suspect though that what is being contemplated is something altogether more rough and ready, something the NCH can impose its branding on more fully.

“It’s a fantastic challenge,” he says. “It’s going to be slow, though. I think we’ve got to be really patient.”