The skin we’re in

Two exhibitions in Lismore are a timely look at race, culture and conniving corporations 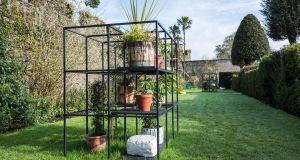 The gardens at Lismore Castle are magnificent at this time of year. Sculptures by artists including Eilis O’Connell and Antony Gormley compete with lush and abundant planting for your attention. Rashid Johnson’s exhibition, No More Water has added some temporary newcomers. Lurking in the herbaceous border is a bust on a plinth, something you might expect to find in the gardens of an historic castle, but this one is a little different.

Instead of a worthy duke or general in marble, the plinth is a base of blackened steel, and the bust itself is a lumpen thing, carved, or rather, shaped from a large piece of bright yellow shea butter. This latter seems, on my visit, to be visibly softening in the summer sun. Shea butter is made from the nut of the shea tree, which grows across the African continent. It is used widely in the cosmetics and pharmaceutical industries. Here it appears raw, unrefined, and anthropomorphically dramatic.

Elsewhere in the gardens are more black steel sculptures. Circular Sculpture 2 is as its descriptive title suggests, but the steel structure contains small windows, in which more shea butter forms have been placed. In Steel Plant Sculpture, ceramic pots hold palms and other plants, each sitting on, and in places overgrowing a scaffolding-like grid.

Inside the gallery, the main room is hung with a series of Johnson’s huge Anxious drawings. Each of these shows another grid, this time painted in oil on cotton rag, and within that grid, enormous eyes peer out over fixed-rictus grinning mouths. There’s something in them that makes me think of Jean-Michel Basquiat’s graffiti-esque style, and they appear, like the plants, to be hemmed in, kept in check. But there’s a tension, as if they are also on the point of breaking forth.

Given his choice of materials: shea butter, palms; and his imagery, it would be tempting to label Johnson as making work about race. But labels are tricky, and although handy for quick descriptions, they frequently end up defining and limiting art. Use a label too frequently and it becomes a cliché, and yet clichés are clichés because they have an element of truth. To call Johnson an African American artist is true, but does that make his work “African American”? And if that were the case, does it make it specific to a single set of experiences and contexts? These are questions and ideas that Johnson himself resists.

He has described how his own extensive travels, through Asia and Europe, as well as the US (he was born in Chicago), have given him a certain set of perspectives. So too has the colour of his skin. On a residency in 2017 at Hauser and Wirth’s Somerset gallery, he found himself surrounded by whiteness. “When I go to a place that feels this distant, when I walk into a store, I’m like, ‘I’m a stranger again’. It’s not about racism per se, but difference on a more existential level,” he said in an interview at the time.

This sense of internal, psychological otherness defines a sense that surely everyone has felt at some point, even those who don’t face immediate labelling because of the colour of their skin, their gender, orientation, or any other outward differences from a straight white male norm. In the present climate of identity politics, victimhood and fractured societies it can feel risky to suggest that even those straight white middle class males may feel different, other, anxious and afraid. This is the type of fear that may lead to aggression, and violence.

Explore those Anxious Drawings more deeply, and discover small flashes of yellow and green in the otherwise monochromatic grid. There’s always a great deal more to be seen than the obvious simple surface colour. It is a nicely paced exhibition: the restrained-yet exuberant garden sculptures segueing to the cool dark grids of the drawings inside. The context, a ducal castle, adds to the layers of ideas about one’s place within society that are at play.

That said, there’s also something rather art-marketable about the work. It is strong and fascinating, but I’m also left with the sense that these works could sit very comfortably in the halls of the wealthy or corporate collectors, their more insistent voices drowned out by the dominant culture of cash and corporations.

But then, in the final room, a video, The New Black Yoga, is pure joy. A group of men revel in the movement of bodies, part yoga, part capoeira, part dance. It was inspired by Johnson’s experience of trying to do yoga in Germany. Failing to follow the teacher’s instructions, because of the language barrier, he came up with something entirely new – and it is a wonder to see.

If Rashid Johnson’s exhibition is exceptionally timely, so too is the current show in Lismore Castle’s sister gallery, St Carthage Hall. When Facts Don’t Matter takes ideas of surveillance and data capture, and presents them in a tight, compact gem of a show. Trevor Paglen’s photographs are beautiful, beguiling the eye, even as they show the track of reconnaissance satellites (Keyhole Improved Crystal from Glacier Point), and a classified “listening station” in the USA (They Watch the Moon).

Eva and Franco Mattes, who work under the pseudonym 0100101110101101.org, show a trio of installations in which computer generated figures recount actual transcripts of the work of internet content moderators. By turns intriguing, funny and chilling, it’s an insight into work that you might think was done by sophisticated algorithms, but at the end of the day, is just people, doing their best; but working for huge companies that may actually be doing quite the opposite.

The King: Timothée Chalamet stars in a hunk of medieval hokum
Real news has value SUBSCRIBE