Best classical concerts: Barry Douglass goes back to the start

Plus: the NCH’s Female Composer series features soprano Sarah Power and the IBO 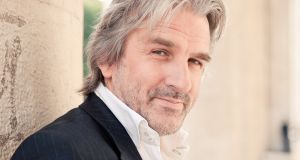 Barry Douglas
Highlanes Gallery, Drogheda, 7.30pm €20/€18/€5 droghedaclassicalmusic.com
Barry Douglas’s international career was launched 33 years ago at the Tchaikovsky International Piano Competition in Moscow in 1986, when he became the first western pianist since Van Cliburn in 1958 to win the first prize outright. His competition performance of Mussorgsky’s Pictures at an Exhibition, later issued on CD, has been described as the interpretation that “laid the foundation for his win at Moscow”. He plays the piece, in the appropriate setting of the Highlanes Gallery, in the final concert of the current Drogheda Classical Music series. He’s coupling it with another Russian work, Rachmaninov’s Moments musicaux.

IBO/Claire Duff
NCH Kevin Barry Recital Room, Dublin 7.30pm €17.50 nch.ie
The National Concert Hall’s Female Composer series jumps back in time with soprano Sarah Power and the Irish Baroque Orchestra directed by Claire Duff. The featured composers make up a very diverse group. Barbara Strozzi (1619-1677) was the illegitimate daughter of the poet and writer of librettos, Giulio Strozzi, and has been called “the most prolific composer – man or woman – of printed secular vocal music in Venice around the middle of the century”. Isabella Leonarda (1620-1704) was a nun at the convent of St Ursula in Novara, and became a mother superior in 1676. The instrumental works of her Op 16 have won her the credit of having composed the earliest sonatas to be published by a woman. Élisabeth Jacquet de La Guerre (1665-1729), whose harpsichord music was recorded by Thurston Dart in the 1950s, was the first woman to compose an opera in France. Maria Antonia Walpurgis (1724-1780), Electress of Saxony, was not just a composer and performer but also a patron not just of music, but also the visual arts. And Maddalena Laura Sirmen (1745-1818), composer of the first string quartets by a woman to be published, was also a violinist, who rated a mention in a letter from Leopold Mozart to his son Wolfgang for “a beautifully written concerto”.

RTÉ NSO/Ilan Volkov
NCH, Dublin 7.30pm €15-€38.50 nch.ie
The RTÉ National Symphony Orchestra’s latest programme looks like either an instance of mistiming or novel investment by RTÉ in the music of living composers. Finland’s Kaija Saariaho was a featured composer at last weekend’s New Music Dublin festival, and just five days after the end of the festival the orchestra is offering the composer’s D’om le Vrai Sens, her 2010 clarinet concerto inspired by medieval tapestries at the Musée national du Moyen Âge in Paris. The panels of the tapestries, a series titled The Lady and the Unicorn, are devoted to the human senses, not just the normal five, but also the elusive sixth. The work was written for Kari Kriikku, who is the soloist in the Irish premiere under Ilan Volkov. The concert’s main work is Mahler’s Seventh Symphony, the least often heard of the composer’s purely instrumental symphonies, and the one his biographer Henry-Louis de La Grange has described as marking “the furthest point to which Mahler advanced on the road to musical modernism”.

The trouble with Ayn Rand and Zack Snyder’s ‘The Fountainhead’?
8